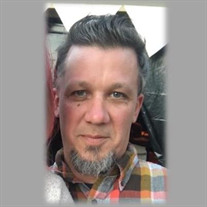 Aaron Boyll, of Fort Collins CO, an adored Father, brother, son, uncle, and friend passed away Tuesday morning, December 17 at Pathways Hospice Center in Loveland, CO, after suffering a 10-month battle with Glioblastoma Multiforme, a terminal form of brain cancer. He was 43. He was always a hard worker, and a good provider for his family. He did a lot of different things throughout his life, but ultimately found his passion in woodworking. His most recent employment was with Genesis Hospitality Inc, in Loveland, CO, where he worked for 9 years, making high-end cabinetry for residential and commercial customers; including extensive work in the lobbies of the Elizabeth and Armstrong hotels in downtown Fort Collins. He also made gifts for his family, which will always be cherished. One of his favorite things to do was go to shows at outdoor amphitheaters like Red Rocks, and The Mishawaka in Colorado with friends and family. He loved being in the mountains and dreamed of someday owning a mountain home with lots of property, where he would be free to be himself; riding four wheelers, shooting guns, and listening to music as loud as he wanted. Everyone that knew him well, knows that he was a free spirit and lived life on his own terms. There was also a domestic side to Aaron; he appreciated good food and enjoyed cooking for the people he loved the most. He was also a clean freak, and liked to keep things neat and tidy, which may be a surprise to some. His greatest joy was spending time with his daughter, Macey. She was the light of his life, and he would do anything for her. Some of their favorite times together were spent in the mountains, watching Michigan sports, and going out to their favorite restaurants in Downtown Fort Collins. He also had several close life-long friends that meant a lot to him. They called each other “brother,” went through good and bad times, and stuck with one another through thick and thin, just like family. Survivors include: His daughter, Macey Boyll, Mom, Judy Boyll, Ex-wife and best friend, Andrea Boyll, sister, Kelly Kay, brother-in-law, Brian Kay, Nephew, Jenson Kay, Niece Sophia Kay, ex-in-laws Gary and Jane Priemer, ex-brother-in-law, Michael Preimer and family, close friends Michael Orr and family, Mike Hazamy, Matt and Tiffany Allison and family; Darren Thebo, Pam Zito, and many other friends and co-workers that will be grieving the loss of Aaron. Memorial services in honor of Aaron will take place in both Colorado and Michigan in the near future. Once determined, the dates will be posted on Facebook. The family would like to request that donations be made to ehtrust.org in lieu of flowers. This non-profit organization carries out cutting edge research to understand and reduce environmental health risks, including cell phone radiation, which has been linked to the development of Glioblastoma tumors and other cancers. If you choose to donate to this cause, please add a note stating, "in memory of Aaron Boyll."

The family of Aaron Boyll created this Life Tributes page to make it easy to share your memories.