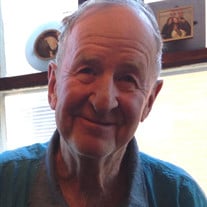 J. Alan Beatty was born in 1940 in Delta Colorado to Clara Mabel Kenner Beatty and Jason Leroy Beatty. As the youngest of 3 boys, he spent his happy childhood in Springfield, Colorado. He had many fond memories growing up in a small town where he could run free and knock on everybody’s door to say hi. He graduated from Springfield High School in 1958 and, following in the steps of his two older brothers Jim and David, attended Adams State University in Alamosa, CO. He majored in Physics with a minor in math. His love of music began in childhood and continued at university where he played tuba in the marching and concert bands, sang in church choirs, and won awards singing and playing guitar at local clubs and parties. After graduation, Alan moved to Chicago where he worked at the Northwestern University observatory. It was here that he met his future wife, Nancy Van Etten. Alan had a successful career in optics and glass coating manufacturing where he held leadership roles in several companies including Libbey Owens Ford and Liberty Mirror. What he was most proud of was his family. Together they spent many happy times canoeing and camping in the boundary waters of Quetico, bird watching at Point Pelee National Park in Ontario, road tripping to Colorado to visit family and camping in the mountains. His guitar playing around the campfire was legendary. Retirement didn’t slow Alan down. He stayed active in the community through a variety of service clubs and volunteer roles. One of his strongest passions was advocating for the vision impaired community. He joined with other community leaders in the area to create the Ensight Skills Center and to promote awareness and support for the blind and vision impaired community through the Lion’s Club. He received numerous awards for his dedicated service including the Mayor’s award and Human Relations Committee award on behalf of his efforts to improve the lives of those with disabilities. He played in multiple bands until his final days including playing banjo, guitar and electric bass in Dixieland and country western bands as well as solo folk performances at nursing homes, assisted living facilities and senior centers. Alan never was a stranger and loved meeting new people. He could barely take a bus ride across town without making a new friend. He will be remembered for his enduring optimism and belief that we are all put on earth to help and support each other. He is survived by his son Bob and daughter-in-law Naomi, daughters Sarah, Rachel and Susie, grandchildren Sidney and Liv, as well as nieces, nephews, cousins and many, many friends and colleagues. He is proceeded in death by his mother and father, brothers David and Jim and wife Nancy. He is deeply missed. Due to COVID19, a private family memorial service will take place in Springfield CO at a later date. Memorial contributions can be made to the Ensight Skills Center in Fort Collins, CO.

J. Alan Beatty was born in 1940 in Delta Colorado to Clara Mabel Kenner Beatty and Jason Leroy Beatty. As the youngest of 3 boys, he spent his happy childhood in Springfield, Colorado. He had many fond memories growing up in a small town where... View Obituary & Service Information

The family of Alan Beatty created this Life Tributes page to make it easy to share your memories.

J. Alan Beatty was born in 1940 in Delta Colorado to Clara Mabel...