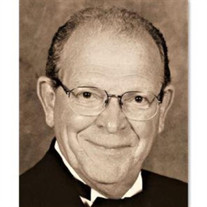 Albert (Al) D. Bloom, 88, of Fort Collins, CO, passed away on May 22, 2021, at McKee Medical Center - Pathways Hospice in Loveland with his loving family by his side. Al, the youngest of a large family, was born in the family home in Brush, CO on August 16, 1932 to Conrad and Magdalena (Holzer) Blum. When his older brothers were serving in the military during World War II, he would translate their letters into German for his parents. His family was active in the local Congregational Church and Al was confirmed in 1948 with the catechism in German. During high school, Al participated in the drama club, ran track and field, and won awards for his beautiful Palmer Method penmanship. He joined the Marine Corps in 1952 and served as an MP. He was stationed in Hawaii, Guam, and Okinawa and was honorably discharged in 1955. Al returned to Colorado and started his lengthy law enforcement career. During his career he worked at the Fort Morgan Police Department, Morgan County Sheriff’s Office, the Colorado Department of Liquor Enforcement, as well as the Weld and Larimer County District Attorney offices. Al was a principal in organizing a joint White Collar Crime Unit with the Weld and Larimer County District Attorneys and was especially proud of their accomplishments in investigating and prosecuting white collar crime. While working as a Police Officer in Fort Morgan, Al met his soon to be bride and the joy of his life, Betty Rockwell, when she was working at Yates Drug Store. They were married on August 17, 1957 at the Methodist Church Chapel in Fort Morgan. They were shivareed by their family and friends and Al had to push Betty in a wheelbarrow down Main Street. The newlyweds settled in Fort Morgan where they had three children: Kirk, Devin, and Diann. The family moved to Fort Collins in 1972. He enjoyed camping, fishing, and golf. He and Betty went on many road trips, bus trips, and ocean and river cruises. He particularly enjoyed their trips to China, Alaska, and the Panama Canal. He was an avid reader. He continued his life of service by volunteering with numerous organizations. Above all, he loved spending time with his family. He and Betty often hosted the Bloom and Rockwell clans for holidays, birthdays, reunions, and other special events. He was master of the grill. They also enjoyed entertaining their many friends and neighbors. He was preceded in death by his parents, brother George Blum and sister-in-law Ester, brother Henry Blum and sister-in-law Leah, brother John Bloom and sister-in-law Eleise, brother Conrad Bloom Jr. and sister-in-law Lydia, brother Harry Bloom and sister-in-law Betty, sister Elizabeth Akers and brother-in-law Dale, sister Marie Wheeler, sister Helen Poynter and brother-in-law Jack. His sisters, Amy and Christine and brother, William, died in childhood. He is survived by his wife of 64 years, Betty, son Kirk Bloom (Arlene), son Devin Bloom (Karen), daughter Diann Quedenfeld (Jon), six grandchildren: Elizabeth Levatino (Sean), Katherine Bloom, Cameron Bloom, Michael Bloom, Brady Betancourt (fiancée Alana Garris), Gabrielle Lopez (Justin), and three great-grandchildren: Silas Lopez, Parker Levatino, and Franklin Levatino, and many nieces and nephews. A Celebration of life service will be held at 11:00 AM, on June 4th, 2021 at the Windsong Estate Event Center, 2901 Saddler Blvd, Severance, CO 80524. Interment will follow at a later date. In lieu of flowers, the family suggests that donations be made to Pathways Hospice of Northern Colorado or the UCHealth Northern Colorado Foundation, in care of Goes Funeral Care, 3665 Canal Drive, Suite E, Fort Collins, CO 80524.

Albert (Al) D. Bloom, 88, of Fort Collins, CO, passed away on May 22, 2021, at McKee Medical Center - Pathways Hospice in Loveland with his loving family by his side. Al, the youngest of a large family, was born in the family home in Brush,... View Obituary & Service Information

The family of Albert Daniel Bloom created this Life Tributes page to make it easy to share your memories.