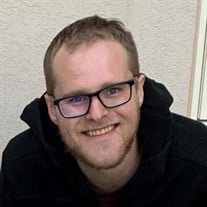 Alex Nuber, 30, died unexpectedly on October 17, 2021. Alex was born at Poudre Valley Hospital in Fort Collins, Colorado on September 17, 1991. He attended Werner Elementary School, Preston Junior High School and Fossil Ridge High School, from which he graduated in 2014. After attending CSU for a year, Alex attended Front Range Community College and graduated with an Associate Degree in 2016. Alex got his first job at Subway when he was in high school. After graduating, he worked at several retail and restaurant jobs, including Target and Blue Agave. His final position was as an electrician’s apprentice with Brian’s Electric. Alex loved creating artworks, especially pottery and painting. He started art classes in high school and was featured in the school art shows. He left behind dozens of pottery pieces and over 100 paintings. Alex loved hiking with the family, especially at Lory State Park, Horsetooth Open Space, and the Great Sand Dunes and Rocky Mountain national parks. Music was also very important to Alex. He learned to play both the guitar and bass while in high school and could improvise beautiful music. Alex shared his family’s love of Thai food and never turned down a chance to go to a local restaurant or have Thai delivered to him during the lockdown. Alex loved gaming – board games with the family, online computer games with friends and often played “Starcraft” with his parents, rescuing them from the evil space aliens. He shared a love of “The Lord of the Rings” and Harry Potter movies with his mother, and they would watch them together every year. Alex’s cat, Lilly, was his best friend and a source of comfort. Alex is survived by his parents Paul and Kellie Barr Nuber of Timnath CO; his brothers Ian (Whitney) Nuber of Timnath, Nathan (Rochelle) Nuber of Bothell WA, and Bryce (Martha) Hart of Seattle WA. He is also survived by his nephew Tristan Nuber of Timnath and his grandfather Stanley Barr of New Richmond WI, as well as many aunts, uncles, and cousins. He is preceded in death by his grandparents Floyd and Doris Nuber and Donna Barr, his uncle David Nuber, and his aunt Michelle Trace. A private memorial is planned.

The family of Alexander Barr Nuber created this Life Tributes page to make it easy to share your memories.