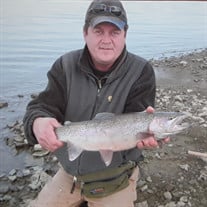 Allen “Aldo” Agens, age 57, died on Thursday, August 3, 2017 at Poudre Valley Hospital in Fort Collins, Colorado following a brief illness. Born in Greeley, Colorado, Allen grew up enjoying the outdoor life. As an adult, it was commonplace to find Allen either hunting, skiing, fishing, or golfing. Over the years, Allen sought adventure. He experienced the frantic city life while living in Chicago; the relaxed, care-free life of Steamboat Springs; and the familiar, family life of his home in Fort Collins. To his friends, “Aldo” was both true and loyal. He is survived in life by his long-time girlfriend, Sandy, and her daughter, Mindy (Steve) and their children, his father, Lloyd, step-mother Joanne, sister, Lori, niece Shanel (Jason) and their two kids, and niece, Shilo, and numerous uncles, aunts and cousins. He is also survived by his two dogs, Lucy and Brutus, and his cat, Kenny. A celebration of life will be held on August 26th at 1:00 PM at 2721 W. Mulberry, Fort Collins, 80521. Special thanks to the physicians and nurses at Poudre Valley Hospital for their loving care and support.

The family of Allen "Aldo" Agens created this Life Tributes page to make it easy to share your memories.