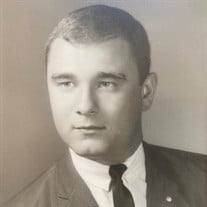 Allen Peter Crabb Jr., “Crabber”, age 78, of Fort Collins Colorado passed away Friday, February 25, 2022. Peter was born October 30, 1943, in Johnstown, Pennsylvania to Allen Peter Crabb and Eliza Marie Waters. Peter’s Father, “Pete”, was Born in Canada, and moved to the United States when he was 4 years old. After graduating from Akron University Pete married Eliza. He worked for the Goodyear Corporation. Prevented from entering the U.S. forces, Pete enlisted with the Canadian Military, and was one of 300 specially picked Airborne Infantry soldiers to assist the British Airborne Infantry in the assault across the channel proceeding D-Day. The small group was selected due to their “invasion experience”. Lieutenant Pete was the first known casualty of D-Day as the result of an exchange of cannon fire and bombings that preceded the invasion, by a few hours on June 6, 1944. Peter was 7 months old when his father was killed. Eliza later remarried a service man which led the family to Fort Benning in Georgia. He attended Fort Benning Children's School Junior High where he played baseball and football. As a freshman, Peter attended Columbus High School in Columbus, Georgia. He moved back to his hometown of Johnstown and graduated from Westmont Hilltop Senior High School. Peter played baseball and was an all-state running back for the Westmont Hilltop Phoenicians football team. After graduating from high school, Peter moved with Eliza and his stepfather to Colorado Springs, Colorado. Peter attended Northeastern Junior College in Sterling, Colorado for a short time before transferring to Colorado State University. He was a member of Alpha Tau Omega in 1963 and 1964. Peter married twice but had no children. Both marriages ended in divorce. In the early 60’s Peter tended bar at Joeseppes, a pizza restaurant and bar, located in Colorado Springs and then again when the restaurant expanded to Fort Collins. While he was attending college he also worked at the Stag Shop and Briar Limited, as well as other high end men's clothing stores in Fort Collins. Peter modeled for local businesses, and his image was seen in the local newspaper, the Coloradoan, and the campus newspaper the Collegian. Peter acquired his real estate license, working for Realty Executives, F&M Realty, and other firms, while he tended bar for nearly 50 years. The majority of those years he worked at the Charco Broiler in Fort Collins and the Black Steer in Loveland. It was at the Charco Broiler where Pete interacted regularly with friends and acquaintances. He was a fixture there for decades. In his last few years Peter worked private parties, putting his bartending skills to work. One of Peter's greatest accomplishments was his triumph over alcoholism. He confronted his problem in the late 70’s and remained sober for decades in a job centered around alcohol. This is a testament to his strength and perseverance. Peter loved river rafting and spent many seasons as a white-water raft guide. He was also an avid dog trainer and competed in, and judged field trials. He took great pride in his dogs’ successes in field trials, especially when Peter showed up in his old Volvo wagon and competed against some of the best trainers in the business. Peter was never without a Labrador retriever. Peter’s children were his dogs, Wally, Duffy, and Murphy to name a few. Waterfowl and upland bird hunting were some of his passions as well. In the 80’s he spent time as a volunteer and organizer for Colorado Ducks Unlimited Fort Collins. His interest in hunting extended to the children of some of his closest friends passing on his knowledge and advice. Peter was great with kids and was a father figure to many of them whom he spent time with. Peter is preceded in death by his parents, Allen Peter Crabb and Eliza Marie Waters. Peter is survived by his many friends whom he impacted in so many ways, evidenced by the 1000+ plus contacts in his phone. A celebration of Peter’s life will be held in the North Forty of the Charco Broiler, 1716 E Mulberry Street, Fort Collins, April 30, 2022 from 2:00pm to 4:00pm.

The family of Allen (Crabber) Peter Crabb created this Life Tributes page to make it easy to share your memories.