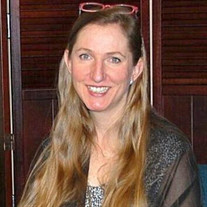 Andrea Kay Greenwall was born in Boulder on November 17, 1969, to Rhonda and Richard Greenwall. Enveloped in love, she passed away at her home in Ault on her 51st birthday. Andrea engaged her cancer diagnosis with characteristic grace, intelligence, fortitude & charisma. Her blog, "Staying C-ful with the big C" https://stayingc-fulwiththebigc.com/ has been a gift of connection & inspiration to many people! Andrea grew up in Boulder & was a graduate of Fairview High, class of '88. She earned her Bachelor's degree from Colorado Christian University in Music / Vocal Performance and Piano. She taught both disciplines in Fort Collins for several years. Like many people's lives do, Andrea's path twisted & turned. This included returning to Boulder & a marriage to Eric Shreve, which ended in divorce a few years later. That prompted her return to Ft. Collins & to CSU, where she pursued her final degree, a Master in Education & Human Resource Studies, which was awarded on May 16, 2009. Next she completed her work to become a National Certified Counselor, which was awarded on October 02, 2009. Working steadily towards becoming a private practice counselor, Andrea's chosen discipline was IFS (Internal Family Systems), of which she completed the Level 1 Training Certification on March 13, 2011. She was successful in carving out a part time private counseling practice, the latest iteration being with SonderMind, as Consonant Construct, LLC. The renaissance woman that she was, Andrea worked for Boomer Music Company on, & sometimes off, for approximately ten years. She became known as a "boomerang!" :) This work served her as she worked towards building her education, certifications & private practice. She was a proud member of the Boomer Music Company's core team of professionals. She left Boomer Music Company early in 2017 to segue her career as a counselor with North Range Behavioral Health / Frontier House in Greeley. Andrea was officially with Frontier House, which is a non-profit off chute of North Range Behavioral Health, for approximately fourteen months before letting that go to fully engage with her cancer diagnosis. While there, she was an integral part of the team of professionals & Clubhouse members, as a Rehabilitation Counselor. She loved her work & her time there, & they loved her. Andrea LOVED speaking & learning French. She spent a year living in France, from the summer of 2012 thru the same of 2013. This time, while challenging on personal fronts, was a true highpoint of her life. She often talked about France, France, FRANCE!! Upon returning home to CO, she was an active member of the French Meetup group in the Ft. Collins area. It was through this community that Andrea met her beloved, Grant. Our beloved Andrea is survived by her: dedicated, loving father, Richard Greenwall, & his wife, Sue; fiance, Grant Kimball, who was by her side throughout, & his daughter, Montana Waters; & many friends & extended family. We will remember our dear Andrea as she was.... Compassionate. Intelligent. Kind. Loving. Thoughtful. Witty! Beautiful.... Andrea was passionate about her work at Frontier House! Please consider a monetary gift to: Frontier House, c/o Andrea Greenwall Memorial, 1407 8th Avenue, Greeley, CO 80631 Her service will be held by First Congregational Church of Boulder, CO at 1:00 PM (MST) on January 17, 2021 via Zoom. To join the service from your home, please adhere to the following below: Join Zoom Meeting https://us02web.zoom.us/j/88027560025?pwd=Z2llR2ZqamhUcjkxMWhYcHpkdUp0Zz09 Meeting ID: 880 2756 0025 Passcode: 001556 One tap mobile +16699009128,,88027560025# US (San Jose) +12532158782,,88027560025# US (Tacoma) Dial by your location +1 669 900 9128 US (San Jose) +1 253 215 8782 US (Tacoma) +1 346 248 7799 US (Houston) +1 646 558 8656 US (New York) +1 301 715 8592 US (Washington D.C) +1 312 626 6799 US (Chicago) Meeting ID: 880 2756 0025 Find your local number: https://us02web.zoom.us/u/kAVAXX05

Andrea Kay Greenwall was born in Boulder on November 17, 1969, to Rhonda and Richard Greenwall. Enveloped in love, she passed away at her home in Ault on her 51st birthday. Andrea engaged her cancer diagnosis with characteristic grace, intelligence,... View Obituary & Service Information

The family of Andrea Greenwall created this Life Tributes page to make it easy to share your memories.