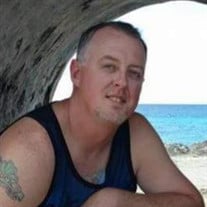 Andy was born in Greeley, CO on Feb 13th, 1981. He passed away on Oct 22nd, 2021 at Mckee Hospital Hospice in Loveland, CO. He is survived by his parents, Ken and Vicky, his children, Logan and Brooke, their mother, Jennifer Heutzenroeder-Connell,... View Obituary & Service Information

The family of Andrew Michael Connell created this Life Tributes page to make it easy to share your memories.