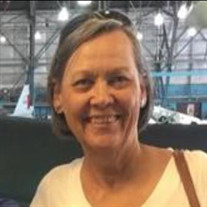 I was born on Thanksgiving Day, November 28, 1946 in Sidney, Nebraska and named Ann Carla Bruns. I was the 4th living child of Carl Arthur Bruns and Alice Viola (Clark) Bruns. I was raised outside Chappell, Nebraska on the family farm that had... View Obituary & Service Information

The family of Ann Carla Bruns created this Life Tributes page to make it easy to share your memories.