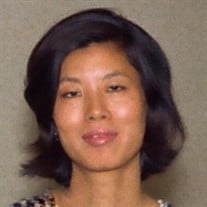 Anna Hsu, age 86, of Fort Collins, Colorado, passed peacefully from this life on February 15, 2022. Anna was born in Shanghai, China on August 6, 1935. Her early years were heavily affected by war. Her professor father had to leave the family to study radar in England, and when he returned years later she didn't know who he was. To escape invading troops, the family then began a dangerous months-long journey, traveling hundreds of miles by hitching in open trucks, carts, and on foot. The war years were difficult, with personal safety at risk and food in short supply. Despite these hard times, or because of them, she developed a resilience and positive spirit that lasted the rest of her life. The family settled in Taiwan in 1948. After high school, she earned an scholarship to study nursing in the United States. She had never spent a night away from home but decided to move to America, where she became an RN & worked in South Dakota, Montana, Minnesota, and Cleveland. There she met Shih-liang Hsu. They were married in Cleveland in 1961 and raised 3 children, moving from Cleveland to Milwaukee, to Pennsylvania, to Denver, and then to Omaha, Nebraska. Anna stopped working as a nurse while raising her children, then became a real estate agent in the early 1970s. She and her husband moved to Houston after the children left for college. As she did throughout her life, Anna made many friends there, where she played mahjong, did water aerobics, Tai Chi and lunched with her “gray-haired friends.” Anna loved to tell stories, making people laugh and educating them at the same time. Her sharp mind and amazing memory were with her until the end. She had a warm and kind heart, great inner strength, and a lightness of spirit. Throughout her life, even as her health declined, she was even-keeled, accepting and gracious, inspiring to those around her, from her family to her caregivers. Anna is survived by her children, James Hsu (Susan Parish), Emily Hsu, and Larry Hsu; and her brother Cheng-Pei Liu. She was preceded in death by her husband, Shih-liang Hsu.

Anna Hsu, age 86, of Fort Collins, Colorado, passed peacefully from this life on February 15, 2022. Anna was born in Shanghai, China on August 6, 1935. Her early years were heavily affected by war. Her professor father had to leave the family... View Obituary & Service Information

The family of Anna Hsu created this Life Tributes page to make it easy to share your memories.