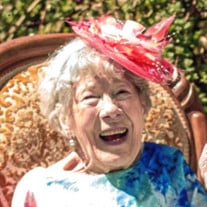 Anna Nadine Gates, (Dean) of Fort Collins, Colorado passed away peacefully in her sleep the morning of Friday, January 24, 2020, at the age of 93. Dean was born to Mae and Roy Hagins, in her grandparent’s home on Loomis Street in Fort Collins Colorado in 1926. Mae, as a single mom, supported her three children in a little house on Mathews by doing Laundry for college boys and being a seamstress. Dean attend schools in Fort Collins where she met the love of her life Charles Oscar Gates (Chuck) at Fort Collins High School. They both graduated in 1944. Dean remembers with pride the great patriotism the high school students displayed during the World War II years. The students bid “farewell and safe journey” to their High School Coach, and classmates as they reported for duty. They sent brothers, sisters, uncles, aunts, cousins, good friends and sweethearts off to various branches of the Service. Dean sent her own sweetheart off to the Marine Corps. She went to California with her future mother-in-law to meet him where they were married February, 15th 1946. Chuck and Dean came back to Fort Collins were Chuck attended Colorado A&M. Dean gave birth to their daughter Charla Deane on October of 1949. Chuck later enlisted back in the Marine Corps during the Korean War and they moved to Orange County, California. There Dean gave birth to Michael Walter on March of 1952. They returned to Colorado briefly before heading off on adventures in California following Chuck’s career in education. During that time, 1956-1995, Dean worked as a secretary and bookkeeper, mostly in the school setting, while pursuing her interests in all sorts of arts. Upon retirement, they lived in both Cayucos California and at the Kinikinik Store in the Poudre Canyon for many years until finally settling in their home in Fort Collins in 2003. Dean was many things; a wife, a mother, an artist, a gardener, a life long learner, but her greatest title and joy was being a grandma. She stated that she didn’t truly become her own person until she became “Grandma Gates.” Charles Thomas, Christopher Michael, Julie Anna, and Matthew Ward were the absolute loves of her life. They later gave her what she referred to as her precious dividends, or “The Greats”! Wallace, Quincy, Brody, Caraline, Reid, Blake, Levi and 2 more on the way brought her giggles and love till the last breath She took. Dean was preceded in death by her parents, sister Doris, brother Stanley, beloved husband Chuck and son Mike. She is survived by her daughter Charla (David) Whitman of California. Her grandchildren Chuck (Polly), Chris (Shana), Julie (Jeff), Matt (Jaclyn)…and of course her precious dividends. She is also survived by many nieces, nephews and wonderful life-long friends. Services will be held at 10:30 am, Saturday, February 1, 2020 at St. Joseph Catholic Church on Mountain Avenue in Ft. Collins Colorado. In lieu of flowers, please honor her with a donation to the charity of your choice.

Anna Nadine Gates, (Dean) of Fort Collins, Colorado passed away peacefully in her sleep the morning of Friday, January 24, 2020, at the age of 93. Dean was born to Mae and Roy Hagins, in her grandparent&#8217;s home on Loomis Street in Fort... View Obituary & Service Information

The family of Anna Nadine Gates created this Life Tributes page to make it easy to share your memories.