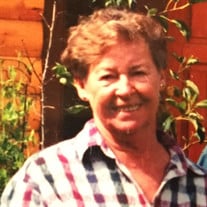 Antoinette Louise Kleewein April 2, 1937 to February 3, 2017 It is with great sorrow that we share the loss of our Mother, Sister, Grandmother, and Great Grandmother Toni Kleewein was born in Castle Rock, CO. Her grandfather had homesteaded the land under the natural rock the town was named for in the 1800’s. Misfortune struck her family when her mother, Margaret, was 6 months pregnant with her. A fire took the life of her father, Anthony, and 3-year-old sister, Joanne. Her mother remarried and Toni grew up with 9 brothers and sisters. She married Arthur Stamm and had 3 children; Vicki, Cindy and Kevin and moved to Olathe, CO where she worked as a forklift driver in the orchards. She eventually divorced Art, moved to Denver, and went to work for a trucking company. After a second marriage ended, she decided to move to Alaska in 1983 to help her brother, Walter, run a very remote lodge at Mile 123 off of the Glenn Hwy. Toni enjoyed running Alaska lodges and moved on to manage the Forty-Mile Roadhouse in Tok, AK and the Evergreen in Delta Junction, AK. She found her way to Anchorage and began managing a trailer park there. Her good friend of many years, Dick Brewster, introduced her to David Schacht. They married and lived many wonderful years together until Dave passed away in 2007. Toni and Dave wanted to move to Matanuska/Susitna Valley north of Anchorage to retire. While walking a ridge on a piece of property, they startled a Ruffled Grouse and her chicks and decided that was where they wanted to build. They started building at age 60! After building their house and creating a large network of friends, they decided they needed to get involved in the community. They became very active in the Meadow Lake Community Council and the Senior Housing Committee. She was one of two who signed the papers to make the Meadow Lake Senior Housing Complex a reality. After serving on the Board of Meadow Lake Seniors as treasurer and then as a member-at-large, she decided it was time to resign. At that point, the board appointed her their only Emeritus member, on of her proudest accomplishments. Toni loved her life and her family, all of whom she considered her greatest possessions. We all belonged to her! She had so many hobbies and was happiest doing any one of them! Including hunting, fishing, collecting & painting rocks, working in her yard, gardening, canning & making jellies, reading, and playing cards (oh, those poker parties!!). She also loved building just about anything and would rearrange doors & windows like others rearrange furniture. She even learned how to grow bees and harvest honey! She loved her 4 legged friends just as much and shared her life with 3 wonderful dogs; Mac, Molly & Tiger. She was an active participant in the Alaska State Fair earning many ribbons and prizes for her flowers, plants and mushrooms. She also served with her garden club doing exhibits and judging entries. In the fall of 2016, after many health problems, she returned to Colorado to live with her son until she finally passed away on February 3rd, 2017. She is survived by her three children; Victoria, Cynthia, and Kevin. Her five grandchildren; Joshua, Jacob, Zachary, Chelsea, and Jasmine. Her seven great grandchildren; Belle, Serenity, Xavier, Zjimken, August, Jeanette, and Delaney. Her brothers and sisters; Mary, Joseph, Walter, Steve, Rose, Frank, and Hank. As well as numerous nieces and nephews, and her faithful friend and guardian, Tiger. Her brother, John, her sister, Barbra, her husband, David, and her ex-husband, Arthur, predecease her. We love and miss you, rest easy!

Antoinette Louise Kleewein April 2, 1937 to February 3, 2017 It is with great sorrow that we share the loss of our Mother, Sister, Grandmother, and Great Grandmother Toni Kleewein was born in Castle Rock, CO. Her grandfather had homesteaded... View Obituary & Service Information

The family of Antoinette Louise Kleewein created this Life Tributes page to make it easy to share your memories.