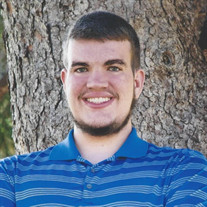 Austin Collin Brown, age 22, of Fort Collins, Colorado, passed from this life on April 18, 2022, in Sioux Center, Iowa. He was looking forward to graduating from college and spending the summer traveling with his family. His absence will be deeply felt. Austin was born in Chandler, Arizona on March 26, 2000, to parents Dale and Valerie Brown. In 2005, the family moved to Fort Collins, Colorado just in time for him to start Kindergarten at Heritage Christian Academy. He graduated from Heritage Christian in 2018 as valedictorian of his class. During high school, Austin was very involved; he enjoyed drama and art, was on student council and in National Honor Society, and participated in basketball and track. After graduation, Austin attended Dordt University in Sioux Center, Iowa. He earned a Bachelor of Arts degree with a Communications Major in Digital Media Productions, which will be awarded posthumously. He was involved in Improv, the Gaming Guild, and worked for the Dordt Media Network. He enjoyed filming sporting events and interacting with his broadcast team. Austin loved to travel and was proud that he had visited all 50 states plus parts of Canada and Mexico. He was into Marvel movies and shows. He loved music, watching movies, video gaming, and creating and editing short films. Austin was the oldest of 5 children and was a great older brother. He would do anything for his siblings. He loved being around people, and especially enjoyed kids. He was always kind. No matter the circumstance, he never said an ill word about another person. He is remembered by his smile and his big heart. Austin worked extremely hard in all he did. He had a zest for life that touched many lives with his genuine manner. He was a believer in the Lord and exemplified Jesus in his life and relationships. Austin was preceded in death by his grandparents, Neill and Carol Brown (Phoenix, AZ), Christian and Henrietta Schiebout (Milaca, MN), and uncle, Jeff Brown (Bentonville, AR). He is survived by his parents, Dale and Valerie Brown, his siblings, Alex, Adam, Aaron, and Staci Brown, and many other relatives and friends. In lieu of flowers, the family requests that you make memorial contributions in honor of Austin to either the Epilepsy Foundation or Dordt University. Austin courageously lived with epilepsy his whole life and he despised everything about it. He loved Dordt University and all the friends, instructors, and community he had there. Donate Today - Epilepsy Foundation (https://give.epilepsy.com/page/33651/donate/1) Make a Gift | Dordt University (https://www.dordt.edu/giving/give) A service to honor Austin’s life will take place on May 2, 2022, at 1:30 pm at Immanuel Christian Reformed Church in Fort Collins, Colorado (1900 S Taft Hill Rd, Fort Collins, CO 80526). This service may be viewed from afar via livestreaming at: https://www.youtube.com/channel/UCn45dexkzL1AspFTs13iSWg A second service and a burial ceremony will be held on May 7, 2022, at 11:00 am at Pease Christian Reformed Church in Pease, Minnesota (117 W, Main St, Pease, MN 56363). This service may be viewed from afar via livestreaming at: https://www.youtube.com/watch?v=Z87fgybHWN0

Austin Collin Brown, age 22, of Fort Collins, Colorado, passed from this life on April 18, 2022, in Sioux Center, Iowa. He was looking forward to graduating from college and spending the summer traveling with his family. His absence will be... View Obituary & Service Information

The family of Austin Collin Brown created this Life Tributes page to make it easy to share your memories.