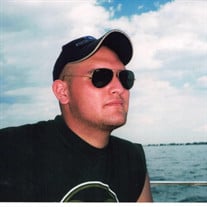 Benjamin (Ben) was born at Poudre Valley Hospital May 21, 1985, to Dawn Sykes. He was the most beautiful baby. His eyelashes were so long that the nurses wondered how he could open his eyes. He attended school at Laurel Elementary, Wellington JR, and graduated high school from Centennial High School in 2001. He started high school as a thirteen-year-old and graduated with 330 credits at sixteen years of age. He was the first Poudre School District student to have dual enrollment; high school and community college. He was an ASE certified mechanic by the age of seventeen. He was the youngest to ever play with the Fort Collins Viper’s Lacrosse team and continued playing in high school. He raised market beef and thought the best 4-H project was cake decorating - it was where all the girls were and if he didn’t catch one of their eyes he could at the least eat his cake. Benjamin was and loved being a world traveler. He traveled to England, Scotland, Holland, Belgium, France, Switzerland, Italy, Spain, and Morocco with his grandmother. For each of these trips there was an adventure to be told. He also traveled to Hawaii, and his work-related travel took him to most of the states, including his favorite state of Alaska. Benjamin worked as a mechanic for Fix-It-Once, Heritage Ford, Transpro (diesel technician). He was a vibro seismic technician and helicopter drill technician. However, his most loved work was as a vibe technician/supervisor. He was one of only 30 men trained worldwide in mechanics, hydraulics, CVSA, AHV-2/AHV-4, DOT regulations, hemi 44 vibes, and project management, Force 2 and 3 electronics. He loved the seismic exploration field, spending his winters in the harsh environment of Prudhoe Bay, Alaska. His most cherished experience while working in Alaska was seeing the expansive Northern Lights. Benjamin is survived by his mother Dawn, his stepfather Russ, brother Preston, biological father Jack Lynch, brother Kennith Lynch (Cristina), sister Jessica Slone, sister Rebecca Ferda, son Ethan Maxwell and daughter Autumn Hand; numerous aunts, uncles, and cousins. He is also survived by his grandmother Harriet, the most beloved person in his life. He is preceded in death by his brother Jason, grandfather Dennis Sykes, grandmother Florence Lynch, and grandfather William Lynch. We will be having a celebration of life for Benjamin on Saturday, March 12th at 1:30-5:00pm. Please bring something to share, stories and food, hugs, tears, and laughter. The address is 4501 North County Road 9 (also known as Giddings Road). This will be a casual and informal event. All are welcome. Stay as long as you wish, come at 1:30 or come later if you need. The family will be having a private ceremony prior to the reception. For those who cannot come, we have and hope to continue to embrace all the outpouring of love we have gotten from close and from afar. Instead of flowers, we ask you to make a contribution to any charity that is helping the people of Ukraine.

Benjamin (Ben) was born at Poudre Valley Hospital May 21, 1985, to Dawn Sykes. He was the most beautiful baby. His eyelashes were so long that the nurses wondered how he could open his eyes. He attended school at Laurel Elementary, Wellington... View Obituary & Service Information

The family of Benjamin Joseph Robert Sykes created this Life Tributes page to make it easy to share your memories.