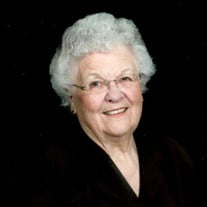 Elizabeth Veronica (Bette) Feldt Younger was born at home to Anton George and Anna Catherine Feldt. One of nine children, Bette enjoyed growing up on the farm in Park, KS. Bette learned to play cards with her family and enjoyed this and other games all her life. Bette first traveled by plane with her oldest brother Jerome, a military pilot, and thus began her wanderlust. A world traveler, Bette traveled with Friendship Force and other groups to many countries and was known for her desire to see and do as much as possible. In addition to traveling, Bette would go to the county fair, Cheyenne Frontier Days, or anywhere else she could spend time with old and new friends. She knew her adopted state of Colorado well and would take visitors to Estes Park, Garden of the Gods or anywhere in between. Bette married LeRoy Younger in 1951, raising five children together while living in Kansas and then settling in Fort Collins, CO in 1963 where they lived for most of the next 50 years. They spent a few years in Keenesburg, CO and Greeley, CO before Bette returned to Fort Collins after LeRoy’s death in 2001. Bette was known as the ‘grandma’ that liked to play in the pool with the neighborhood children or was the first to bring homemade cookies to a new family. Bette was a mail carrier on a rural route for many years, and after retirement worked at King Soopers and the Budweiser Event Center, as well as volunteering at the Colorado Welcome Center and the Lincoln Event Center. A devout Catholic, Bette was a member of St. Jude’s for over 50 years. She attended St. Joseph’s Catholic Church in Fort Collins until St. Elizabeth Ann Seton was built. Bette died on January 22, 2021 at Good Samaritan in Fort Collins at the age of 90. Bette is survived by her children Audrey (Ron) Danner, Craig, CO, Glenn (Bridget) Younger, Ramona, CA, Wayne (Holly) Younger, Fort Collins, CO, Denise (Stan) Sunderman, Otis, CO and Ann McCrady (Kirk Williams), Hebron, KY, Grandchildren Rachel (Thane) Stranathan, Jonathan (Jessica) Mills-Younger, Jesalyn Younger (Rock Smith), Janese Younger, Jennifer (Ryan) Morgan, Leslie (Kevin) Mason, Devin (Amber) Hase, Brode (Brittany) McCrady, Caitlin McCrady, John (Holly), Jason, and Jared (Natalie) Williams and great grandchildren Avery, Sydney, Ryan, Chase, Colton, Teagen, Cooper, Kennedy, Bentley, Asher, Lucas, Luca, Thomas, Lucy, Fiona, Connor, Jaxson, and Annabelle. She is also survived by her sister’s in law Lois and Marge Feldt, and Ina Stigall, and brother Anthony Feldt, many nieces and nephews and a host of friends. She is preceded in death by her parents, her husband LeRoy, her siblings, Anna Marie Huelsman, Teresa Benton, Jerome, Cletus, Jack, Norbert and Peter Feldt and one grandson, Ryan Danner. Memorial Mass is scheduled for 2pm August 20th, 2021 at Saint Elizabeth Ann Seton Catholic Parish in Fort Collins, Colorado. The burial of her ashes will be in Sacred Heart cemetery in Park, KS. The Mass is also being live-streamed online at the following link: https://www.facebook.com/pages/category/Religious-Organization/St-Elizabeth-Ann-Seton-Catholic-Parish-in-Fort-Collins-CO-613861565303368/ Memorials are suggested in the form of a memorial mass at the church of your choice or to the St. Elizabeth Ann Seton Capital Campaign. Donations may be made in care of Goes Funeral Care in Fort Collins, CO.

Elizabeth Veronica (Bette) Feldt Younger was born at home to Anton George and Anna Catherine Feldt. One of nine children, Bette enjoyed growing up on the farm in Park, KS. Bette learned to play cards with her family and enjoyed this and other... View Obituary & Service Information

The family of Bette V. Younger created this Life Tributes page to make it easy to share your memories.

Elizabeth Veronica (Bette) Feldt Younger was born at home to...