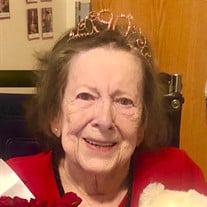 Bettie Omega Waldron (also fondly known as “Grandma Bettie” and “Bettie Boop”), age 91, of Fort Collins, Colorado, graduated to Heaven on May 4, 2022. Bettie was born in Somerville, Alabama, on January 19, 1931, to parents Harry Floyd and Eula Mae Martin, the fifth of eight children. Bettie’s family moved north to Toppenish, Washington, when she was a teenager, where she became a key player on her high school state champion basketball team. Bettie graduated from high school in spring 1949. Shortly after graduation on June 4, 1949, Bettie married Donald Waldron. The young couple managed a small chicken farm in Buena, Washington, for several years, before Don became employed with the Social Security Administration. In the years that followed, Don’s job led them from their little farm in Washington to Great Falls, Montana; Casper, Wyoming; Lakewood, Colorado; and Sterling, Colorado. Bettie was the homemaker for their five children, although her health was gravely impacted by a car accident in the mid-’60s that required multiple surgeries over the next several years. In 1976, Bettie and Don divorced. A few years later, Bettie returned to school to earn her Associate Degree at Northeastern Junior College in Sterling and afterward began working in a local jewelry store. When her last child had graduated from high school, Bettie moved to Fort Collins, Colorado, in 1987. There she found another position at a jewelry store and later became a host home provider for Mosaic. During this season, she also became involved with the Does (Lady Elks) and was appointed as president of her Does chapter in 1990. Bettie’s creative homemaking skills extended throughout her life, even after her move into a care facility in recent years. Her home was always an inviting, cozy nest, well-decorated for holidays, and filled with plants that thrived because of her green thumb. She loved kids and pets the best and especially doted on her grandchildren. Faith was an important part of Bettie’s life. She grew up in the Church of God, in which her father was a pastor, and she raised her children in the Christian faith. Most recently, she attended Timberline Church in Fort Collins. She also maintained a strong connection to Living Rivers Millennial Church and Renner Ministries in Tulsa, Oklahoma, where she frequently visited her daughter Cindy. Friends and family will miss Bettie’s spunky personality. She loved to tease and enjoyed playful humor with everyone from the grandkids to her caregivers. Bettie is survived by her children: Lani (Clark) Mozer; Debbie (Kerry Davis) Lapp; Cindy Hansen; Craig (Shelly) Waldron; and Kim DeVilbiss; grandchildren: Lindsey, Zack (Candice), Ben (Elizabeth), Jessica, Nikki, Dougal (Izabela), Eric (Linda), Evan (Sara), Selah (Marcus), Bria (Cole), Carrie, Abby, Maya, and Sam; great-grandchildren: Ellie, Leah, Zoe, Paige, Bailey, Jack, Amari, Sadie, Kayson, Micah, and Madelyn; her siblings: Peggy; Donnie (Ginny); and sister-in-law Sharon; and her many nieces and nephews. Bettie was preceded in death by her siblings: Faye (Deward); Harry Jr. (Thelma); Lela Mae; Inez (Cliff), and Charles; and her 2 long-time companions: Ron and Lester. A Memorial Service will be held at 11:00 a.m., Tuesday, May 17, 2022, in the East Auditorium of Timberline Church in Fort Collins, followed by a reception. Interment will take place afterward at Roselawn Cemetery in Fort Collins. In lieu of flowers, donations can be made in Bettie’s honor to Foothills Gateway Foundation at: https://www.foothillsgateway.org/how-to-help/donate/

The family of Bettie Omega Waldron created this Life Tributes page to make it easy to share your memories.