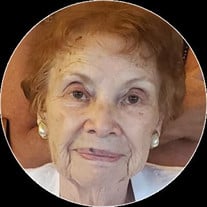 Our mother Betty passed away July 5th in Fort Collins, Colorado, after a well fought battle with dementia-secure in the love of her family. She was born in Scottsbluff, Nebraska December 22, 1932 to Beulah and Morris Prouty. She grew up and lived in the Alliance, Nebraska area and that is where her heart remained even after she moved to Colorado. In 1949 she married Emery Dempsey and to that union 5 children were born and raised. She had a passion for cleaning everything with bleach until it shined, be it the windows, floors or even her children! Her trademark article of clothing, which ironically she was wearing when she passed, was a white, round collar blouse. She came to an accurate knowledge of the Bible and dedicated her life to her God and was baptized as one of Jehovah’s witnesses in 1952. She enjoyed sharing her faith with others. Down to her last hours she found comfort in hearing the Scriptures read to her. Following the death of our dad Emery, she married William Benton. Upon his passing she moved to Colorado to be closer to her family. She was preceded in death by husbands Emery Dempsey and William Benton, one son, Larry Dempsey, her parents, one brother and 3 sisters. Surviving Betty are her children, Kathy (John) Kampbell of Omaha, Nebraska, William (Kathy) Dempsey of Charlotte, North Carolina, Karen (Kevin) Meyers and Rhonda (Dave) Ebel of Laporte, Colorado. Also her sister Marjorie Prouty of Peoria Heights, Illinois and brother Leo (JR) Tritle of Scottsbluff, Nebraska, 12 grandchildren, 20 great grandchildren and 4 great great grandchildren. Mom died with faith in the promise that she would be in Jehovah God’s memory and soon the promises of Revelation 21:3,4 would be a reality, when she would be brought back to life on a Paradise Earth to be reunited with those she loved. Per Betty’s request no service will be held. Many thanks to the staff at Centre Rehab, Columbine West, Pathways Hospice and especially Goes Funeral Home.

Our mother Betty passed away July 5th in Fort Collins, Colorado, after a well fought battle with dementia-secure in the love of her family. She was born in Scottsbluff, Nebraska December 22, 1932 to Beulah and Morris Prouty. She grew up and... View Obituary & Service Information

The family of Betty Dempsey Benton created this Life Tributes page to make it easy to share your memories.