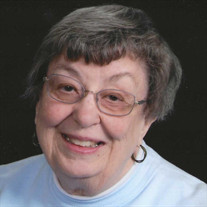 To many of her students, she was their favorite elementary school teacher. To her friends, coworkers, and extended family, she was a creative and dependable presence, a loyal and kind companion, and a maker of gorgeous quilts and tasty pies... View Obituary & Service Information

The family of Betty Waller created this Life Tributes page to make it easy to share your memories.

To many of her students, she was their favorite elementary school...