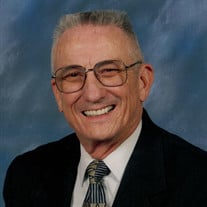 Robert “Bob” Hugh Lynch 86, of Fort Collins, died February 17, 2019 in Loveland, Colorado. Bob was born and raised in Waterloo, Iowa, by parents Richard and Winifred Lynch. He graduated from Marquette University in Milwaukee with a business degree, after which he served in the United States Marine Corps and Army. Bob met Mary Julia Pieper during college and married on June 25, 1960. They had three children, Maureen Ann, Kevin Patrick, and Kathleen Virginia, who were all raised in Colorado Springs, where Bob and Mary settled in 1969. In Iowa, Bob worked as a field auditor for the Federal Power Commission, a rate analyst for the Iowa State Commerce Commission, and controller for Chamberlain Manufacturing Corp. of Waterloo, Iowa. The family’s move to Colorado Springs brought a change with the purchase of controlling interest in the Ponderosa Motor Inn and Chateau Motor Hotel, where Bob served as president and general manager. Bob was active in the hotel-motel associations throughout the United States, serving as director of the Colorado Motel Association and the Pikes Peak Motel Association. After selling the Ponderosa and Chateau, Bob stayed in Real Estate for some time and then finished out his career as an Accountant for private companies. In Colorado Springs, Bob was extremely active in Republican Party politics and elections, as well as in his church, Holy Trinity Catholic Church. It was there he joined the Knights of Columbus, as well as singing in the church choir. After moving to Fort Collins in 2003, Bob didn’t miss a beat. He stayed active as a 4th degree Knight in the Knights of Columbus, sang in the choir at Saint Joseph Catholic Church, and volunteered with the Republican Party. He was a member at the Fort Collins Senior Center, where he enjoyed being part of the “Donut it make you wonder” group. He even took up a part-time job at Sears in the shoe department. Bob was preceded in death by his wife, Mary; daughter, Maureen; son, Kevin; and older brother, Richard. He is survived by his daughter, Kathy Lynch; brother and sister-in-law, Ron and Bernie Lynch; many nieces and nephews; and his grand-dog. Bob’s family would like to acknowledge and thank North Shore Health and Rehab and Pathways Hospice for the amazing care they provided. Memorial Mass at 10:00 a.m., February 28th at Holy Trinity Catholic Church in Colorado Springs, followed by interment at Evergreen Cemetery.

The family of Bob Lynch created this Life Tributes page to make it easy to share your memories.