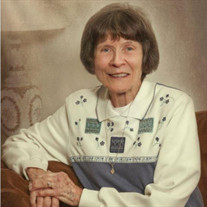 Bonnie Louise (Hammond) Ulrich was born in Waterloo, Iowa to John Morrison Hammond and Eleanor Agnes (Kenney) Hammond on January 16th, 1932. She graduated from Scottsbluff Highschool in 1949 as a member of the National Honor Society. She moved away to attend the College of Saint Catherine in St. Paul, Minnesota where she graduated with a Bachelor of Arts in 1953. She studied music performance and teaching, and often performed in school chorales and theater. She was a White Rose Circle Lifetime Member of the Kappa Delta Sorority ‘PI’ Chapter since 1951. She was also a National Music Mu Phi Epsilon Sorority Member while at the University of Nebraska, where she received her teaching certificate in 1951. She was a soloist and soprano who even sang at her own wedding and for other friends’ weddings. She began her teaching career in Genoa, Colorado at age 22, in a tiny K-12 school, where she met Stanley Strickler Ulrich from Lititz, Pennsylvania. He was 7 years her senior and had begun teaching after his military service and education at the University of Colorado, Boulder. They married on June 17th, 1954 and continued teaching in Fort Morgan, CO until they signed up for the Department of Defense as civilian teachers so Stan could fulfill his dream of seeing the world. They taught 2 years in France and 3 years in West Germany, where they adopted their only child Christina Daniela from Kinderheim Veigold before returning to Timnath, CO in 1961. She began her Kindergarten teaching career with Poudre School District, after a year at Cache La Poudre Elementary as a Music Teacher when Stan was the principal of the Junior High. She taught for nearly 30 years at Barton Elementary School and retired in 1991 after 38 years of dedication. She and Stan loved to travel, and they visited Egypt, Europe and Greece several more times together. Bonnie was a loving grandmother and after retirement took care of her grandsons so her daughter could attend Colorado State University. She was a long-time volunteer with PRSEA and CRSEA teacher’s associations and for Volunteers of America in the Mail Brigade and Grocery Shoppers teams. She found most of her joy in singing to the Lord with her parish choir at Saint Joseph’s for over 53 years! Bonnie was preceded in death by her parents John and Eleanor Hammond, husband Stanley S. Ulrich in 2013, her sister Barbara Kimmel and beloved Grandson PFC Benjamin K. Likes in 2014. We know that she is singing in Heaven with the Angels and worshipping our Almighty Creator with no more tears. She will be dearly missed by her daughter Christina Ulrich-Jones and son-In-law Larry Jones, who have spent these past seven years caring for her and enjoying her company through the challenges of Lewy Body Dementia. She is also survived by Grandson, Richard Dempsey and family of Ft. Collins, Granddaughter Megan Jones and her husband, Josh Sibetang, of Nampa Idaho, and 2 great grandchildren, Carson and MJD. A Rosary will be held at 1:30 pm, followed by a Memorial Mass at 2:00 pm on Tuesday, August 18th, 2020 at Saint Joseph Catholic Church, 300 W Mountain Avenue, Fort Collins, CO 80521. Rosary and Mass will also be streamed live online at: https://www.youtube.com/channel/UCfTYqQ96sVNl3ED-UZFF0eA or on facebook here: https://www.facebook.com/StJosephChurchFC/ Interment with her husband, Stan, at Fort Logan National Cemetery in Denver, CO. Bonnie asked for donations in lieu of flowers to be sent to CRSEA Fort Collins Chapter in care of Goes Funeral Care, 3665 Canal Drive, Suite B, Fort Collins, CO 80524.

Bonnie Louise (Hammond) Ulrich was born in Waterloo, Iowa to John Morrison Hammond and Eleanor Agnes (Kenney) Hammond on January 16th, 1932. She graduated from Scottsbluff Highschool in 1949 as a member of the National Honor Society. She moved... View Obituary & Service Information

The family of Bonnie Louise Ulrich created this Life Tributes page to make it easy to share your memories.

Bonnie Louise (Hammond) Ulrich was born in Waterloo, Iowa to...