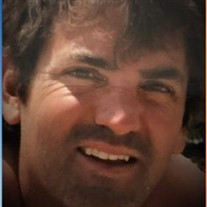 Bradley “Brad” Ruffell entered into his eternal resting place on August 27, 2019 in Fort Collins, Colorado. On November 17, 1975, Murray and Elizabeth “Bets” Ruffell celebrated Bradley’s birth. He was born in Annapolis, Maryland – a beautiful baby. Brad’s humor was infectious. There was always laughter and tomfoolery when Brad was around. Brad liked to live life to the fullest. Ask any one of his friends – they will have a story to tell about his generosity, creativity, and devotion to those he loved. He adored his family. He reveled in being a father and a doting partner to Becca Dice. At the end of every phone call he would ask, “What can I do for you?” In passing, Bradley did the ultimate: He donated vital organs to people who were waiting for transplants. In his life, he aspired to help at least one person every day. Through these donations he is fulfilling this aspiration. Brad enjoyed reading, meditation, and working on art projects with his children. Bradley is preceded in death by his mother, Elizabeth Ruffell, and his brother, Jeffrey Ruffell. He is survived by his significant other, Becca Dice, and is deeply missed by Christy Ruffell; son, Gavin Ruffell; his middle daughter, Delaney Ruffell and his youngest daughter, Grace Ruffell. His father and stepmother, Murray and Deana Ruffell, mourn his passing. Brad is survived by his siblings; Sara Schweppe (Tim Schweppe), Kristin Bulgin (Casey Bulgin), and Taylor Ruffell (Lynsey Ruffell). His nephews, Brendan Hunter and Corbin Kahle, were deeply loved by Bradley. On his mother’s side, he is survived by an aunt, Janie Natale (Chris Natale) and an uncle, Johnny Tobias (Lori Tobias). On his father’s side, he is survived by Aunt Carole and Uncle Terry Ruffell. His cousins will miss him dearly. We would like to acknowledge the tremendous care Brad received at UCHealth Poudre Valley Hospital. Gratitude goes out to everyone on the ICU floor, the brilliant doctors, and the amazing palliative care team. In lieu of flowers, please consider making a donation to The Bradley Ruffell Memorial Fund at any Wells Fargo bank. All donations will go toward his philanthropic wishes.

The family of Bradley Murray Ruffell created this Life Tributes page to make it easy to share your memories.