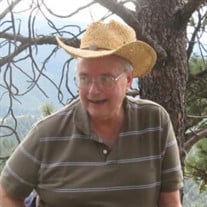 Brian M. Kent passed away on May 19, 2020 after unexpectedly being diagnosed with cancer less than a week earlier. Brian was born in 1941 to Edward and Dorothy Kent. He was the middle child and had two sisters, Jean and Beth. Brian grew up in Wexford, Pennsylvania where he spent his time outdoors, tormenting his mother with snakes and other critters that he caught. He attended Shadyside Academy. Brian earned his B.S. (1967) from Purdue University. He went on to earn a Master’s (1970) and PhD (1977) in Forestry Biometrics from Pennsylvania State University. After meeting his future wife on a blind date in January of 1966, Brian and Theresa (Terri) married in 1967. They celebrated their 52nd wedding anniversary last June. Brian and Terri raised four daughters together. Brian encouraged them to do whatever they wanted in life and to get a good education. He often added fun and jokes to the daunting task of raising four girls by doing things like giving them nicknames such as “SR” for the youngest two meaning “spoiled rotten”. After earning his PhD, Brian accepted a job as a professor of forestry at Colorado State University. In 1981, he left CSU and transferred to the US Forest Service where he worked until he retired in 2010. While at the Forest Service, Brian worked on many projects including wildfire risk mitigation and climate change. Before having daughters, Brian collected sports cars. His love of collectibles never stopped and throughout his life he collected antique guns, books, cameras, and most recently antique tools. He took great pleasure in learning the history, mechanics and stories behind his collections. Brian was a lifelong learner and avid reader of fiction and non-fiction alike. Brian referred to the mountains as his church. He loved taking long hikes where he could fully appreciate nature’s beauty, study trees and practice his photography skills. He called time spent in the mountains “woods loafing”. Brian insisted that family vacations be spent camping or relaxing at the family’s cabin. He also loved to garden and especially enjoyed growing tomatoes and peppers. Brian instilled in all four daughters a love and appreciation for nature. Brian enjoyed making friends wherever he went and was like a brother to many. Some of his favorite times included traveling to different collectors’ events with his buddies. Even long after retirement, he enjoyed regular lunches and happy hours with his former colleagues. He often spent hours on the phone catching up with friends both old and new. He is remembered for his boisterous laugh, no-nonsense attitude, love of Mexican food, intellect, bear hugs and most of all his big heart. Brian is survived by his daughters Mary Kent, Suzanne Kent, Roberta Kent and Megan Van Kent; his sons-in-law Brad Hanson, Brian Loner, and Jeffrey Van Kent; his grandchild Roland Van Kent; and niece Dorothy Keener. He was preceded in death by his wife Theresa, who passed away in February 2020 just three months before Brian; and sisters Jean and Beth. In lieu of flowers, please consider a donation to an organization whose mission is to protect forests. The Kent daughters would love to hear stories and see photos please send them to [email protected] Due to Covid the service will be taking place at a later date. Please check this page or call Goes Funeral Care at 970-482-2221 for service updates.

Brian M. Kent passed away on May 19, 2020 after unexpectedly being diagnosed with cancer less than a week earlier. Brian was born in 1941 to Edward and Dorothy Kent. He was the middle child and had two sisters, Jean and Beth. Brian grew up... View Obituary & Service Information

The family of Brian Mather Kent created this Life Tributes page to make it easy to share your memories.