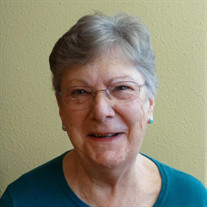 Catherine Mary Culak passed away on February 28, 2022 at the age of 77. Catherine’s love of life didn’t come to an end with her death. She was surrounded by her loving family who will continue to honor her legacy by living their lives to the fullest. Catherine was a caring wife, mother, grandmother, sister, and friend. She had just recently moved to Fort Collins, Colorado, but had spent the majority of her life in Albuquerque, New Mexico, where she felt most at home. She built beautiful relationships with so many wonderful people in Albuquerque, who were consistently a strong support system for her. Catherine loved spending time with her children and grandchildren whenever possible. She also loved playing games like Scrabble and Mahjong, visiting, sharing meals, and traveling with friends. She was an incredible cook and frequently shared the comfort of her delicious baking. She freely extended her kindness to those around her, lending a helping hand and volunteering for various organizations. She was a great listener and always made you feel special and important. She also had an incredible sense of humor, which remained intact. It was one of the ways she won the hearts of many of her doctors and nurses in her last months. Catherine was born January 22,1945 in Warrington, England to parents Francis and Mary Stirrup. She grew up in Warrington and after high school, continued her education to become a teacher. Catherine taught middle school in England, then taught second grade in Canada before taking a year off to travel the United States. During a stop in Key West, she met Jerry Culak and they were married a year later. They settled in Deming, New Mexico, where Catherine worked as a nurse aid at the hospital and where their two children were born. In 1981, the family relocated to Albuquerque, Catherine began her career as a bookkeeper at Earth Origins shoe store. She is survived by her ex-husband, Jerry Culak; son Mike Culak and his partner Jack Cuevas; daughter, Mary Spezza and her husband Nicholas; granddaughters Adia (16) and Nicola (12); her brother John and his wife Sue and her brother Gerard and his wife Barbara; and many nieces and nephews. She was predeceased by her parents and her brothers Paul and Alban. A Rosary Service (10:00 a.m. MST) and Memorial Service (11:00 a.m. MST) will be held at Saint John XXIII Church 4831 Tramway Ridge Dr NE, Albuquerque, NM 87111 on Friday, May 6th. In lieu of flowers, the family prefers donations to be made in Catherine’s honor to Francis House Catholic Worker. Checks can be mailed to PO Box 80132, Albuquerque, NM 87198 care of Glenn Rosedale.

Catherine Mary Culak passed away on February 28, 2022 at the age of 77. Catherine&#8217;s love of life didn&#8217;t come to an end with her death. She was surrounded by her loving family who will continue to honor her legacy by living their... View Obituary & Service Information

The family of Catherine Mary Culak created this Life Tributes page to make it easy to share your memories.