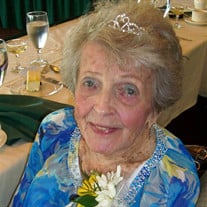 Catherine Christopher, known as Katy, passed away September 17, 2018, of natural causes. Katy was born June 9, 1912, in Danville, Illinois. Yes, she lived to be 106. She saw both World War I and II, as well as the Great Depression, Prohibition, the Jazz Age, the Big Band era, Elvis Presley, the Beatles - and so much more. Katy’s father was a country doctor, and would drive a horse and buggy through midwestern winter nights to make house calls at farms and in small towns. The family eventually moved into town, and Katy had a happy childhood in Danville. She attended the University of Michigan. There, she joined Kappa Kappa Gamma, with which she remained involved throughout most of her life. While at Michigan, she met Gardner Smith. They were married right after graduation. In 1944, Katy and Gardner moved to Los Angeles, where she became an elementary school teacher in the Los Angeles Unified School District. She later became a school principal. Katy and Gardner loved a good time, and enjoyed boating along the California coast and socializing with a large group of close friends. They were together over 50 years, until Gardner passed away in the 1980s. Katy continued to travel and remained very active. Years later, Katy met Stan Christopher at a homeowner’s association meeting. Both in their 80s, they quickly fell in love. They were married for many years, and enjoyed traveling the country in their RV. When Stan passed away at 100, Katy moved to Fort Collins to be near her daughter Fenton. To her daughter, Katy was a wonderful mother. To her friends and family, she was a warm, outgoing, smart person, with a great sense of humor. When asked about the secret to her long life, she would emphasize the importance of being able to deal with whatever changes came her way, enjoying life to its fullest, and keeping a positive outlook. Katy leaves behind her daughter, Fenton Martin; her granddaughters, Diana Gruenler (Steven) and Carol Lane (John); and two great-grandsons, Travis Gruenler and Brett Gruenler. She will be greatly missed. A Memorial Service will take place at 3:00 pm, October 6, 2018 at St. Luke’s Episcopal Church in Fort Collins.

Catherine Christopher, known as Katy, passed away September 17, 2018, of natural causes. Katy was born June 9, 1912, in Danville, Illinois. Yes, she lived to be 106. She saw both World War I and II, as well as the Great Depression, Prohibition,... View Obituary & Service Information

The family of Catherine "Katy" Christopher created this Life Tributes page to make it easy to share your memories.