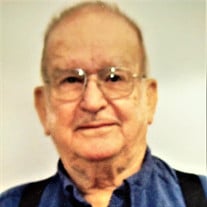 Cecil Lyle Ahnstedt, 88, of Loveland, Colorado, passed from this life on March 1, 2022. Cecil was born and raised in Fleming, Colorado, to parents Alvin and Cecil Ahnstedt. He graduated from Fleming High School. He then enlisted in the Army and served during the Korean War. Upon his return to the United States from Germany, he settled in Guernsey, Wyoming. He was the Depot Manager for the Burlington Northern Railroad for several years; then in 1963, he moved to Loveland, Colorado. Cecil started in the shipping department at HP, where he spent the rest of his career and where he met his second wife, Louise. Cecil’s family grew with the marriage, with her five children and his two becoming a blended family. In 1983, they added another child to the family, adopting Barb at the age of 13. Cecil was proud of his family and joined Louise in taking the grandkids on adventures camping in their 5th wheel or hosting sleep-overs. Cecil had a big personality. He loved to talk to people, sharing stories and good conversation. Within two minutes of meeting anyone, including in one case Bill Murray, Cecil was no longer a stranger, but a close friend. He enjoyed going to auctions, garage sales and yard sales, as well as spending time in his son’s repair shop and travelling with Louise. Cecil and his daughter Barb took classes together to become certified as clowns. He loved to dress up in his clown gear for parades and parties. Cecil was also a craftsman of canes; in total, his collection includes hundreds of canes that he either found at a yard sales or made himself. Cecil’s family totals over 80 in all. He is survived by his children, Alvin (Carol) Ahnstedt, Terry (Denny) Ahnstedt, Barb Ahnstedt, Linda Griffith, Robert (Kandy) Aitchison, and Donald (Kay) Aitchison; 20 grandchildren; 38 great-grandchildren; and 9 great-great-grandchildren. He was preceded in death by his wife Louise Ahnstedt and sons, Michael Aitchison and Mark Aitchison, and son-in-law, Daniel Griffith. A service with the presentation of military honors will be held at 11:00 am, Wednesday, March 9 at Loveland Burial Park in Loveland, CO (in the West side in the flat headstone area). A reception will follow at Life Springs Church 743 S. Dotsero Dr Loveland, Co 80537.

Cecil Lyle Ahnstedt, 88, of Loveland, Colorado, passed from this life on March 1, 2022. Cecil was born and raised in Fleming, Colorado, to parents Alvin and Cecil Ahnstedt. He graduated from Fleming High School. He then enlisted in the Army... View Obituary & Service Information

The family of Cecil Lyle Ahnstedt created this Life Tributes page to make it easy to share your memories.

Cecil Lyle Ahnstedt, 88, of Loveland, Colorado, passed from this...