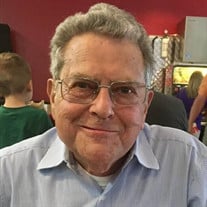 Cecil Bruce Cropp, known as Bruce to all, died at his home in Fort Collins late Thursday, April 16, 2020. Bruce and his wife of 67 years, Mary, recently moved to Fort Collins from the dream home they built in the Virginia Dale community of Colorado. Bruce was an army veteran and served in Italy. He attended Colorado State University and received his Undergraduate and Masters degree there. He worked for several organizations, including Mead Johnson, the Air Force Academy, and ended up at the Center for Disease Control (CDC) on the Foothills Campus of Colorado State University in 1968. Bruce retired from the CDC in 2000 after 32 years as a Research Virologist/Microbiologist. He was an extremely successful and respected scientist throughout the world, and was known for his work on Streptococcus, West Nile Virus, Dengue Virus, Yellow Fever Virus, and many other world diseases. He was credited with work on numerous scientific publications and studies, and traveled the world for his research. After his retirement from the CDC, he began his dream of building a mountain log home in Virginia Dale, cutting down the trees and doing a majority of the work himself while enlisting help from his children, their spouses, grandchildren and friends to complete the home. With this project completed, he was recruited to help develop and open a new Asian Diseases Laboratory for the University of Hawaii, so he and Mary moved to Oahu. What was supposed to be a one-year position turned into a seven-year tenure, with extended excursions to Singapore and Vietnam. Upon returning home, he and Mary settled into their mountain escape. Bruce has always loved horses! He and his father, Cecil, owned and ran a saddle stable in his early married years. Once settled into the Virginia Dale home, he decided it was time to have a horse to enjoy. Their wonderful friends and neighbors helped to fence the pasture and build a shelter for his new companion. Bruce and Mary attended a horse sale in South Dakota and found the perfect horse… a pregnant quarter horse that they named Sugar. At almost the exact same time he found out he had developed lung cancer. He was a valiant warrior against this disease, but ultimately succumbed. Bruce is survived by his wife Mary, his children Cathi and Tom Lopez, Julie and Marty Damrell, Casey and Karna Cropp, Laurie and Steve Groves, David and Molly Cropp, Carol Cropp, 10 grandchildren, and 6 great-grandchildren. The family would like to acknowledge and thank the very special people at Pathways Hospice Care who helped care for Bruce in his last few weeks, as well as the extremely kind and caring friends at Goes Funeral Care. A celebration of Bruce’s life will be held on a future date when family and friends can gather together safely. Donations to celebrate Bruce’s life can be made to St. Jude Children’s Research Hospital at stjude.org, or Pathways Hospice Care at pathways-care.org.

Cecil Bruce Cropp, known as Bruce to all, died at his home in Fort Collins late Thursday, April 16, 2020. Bruce and his wife of 67 years, Mary, recently moved to Fort Collins from the dream home they built in the Virginia Dale community of... View Obituary & Service Information

The family of Cecil Bruce Cropp created this Life Tributes page to make it easy to share your memories.

Cecil Bruce Cropp, known as Bruce to all, died at his home in...