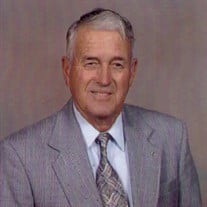 A truly remarkable man passed away peacefully on April 13, 2017 after a 12 year struggle with Parkinson's Disease. Charles (Chuck) Wesley Johnson was born May 17, 1928, the third of five sons of Louise and William Johnson. He was raised on a farm outside New Underwood, South Dakota until he moved to Denver in 1949. It was there he met and married the love of his life, Betty Goodall, in January 1951. He was drafted into the Army soon thereafter and was sent to Korea where he served with the original MASH Hospital, Unit 8055, for 2 years. Upon his return from war, Chuck was employed as a Medical Administrator at Buckley Air National Guard base for 30 years. Chuck and Betty eventually settled in Aurora, where they began a 66 year journey of happily raising a family, enjoying their many friends, and spending many winters as snowbirds in Sun City West, AZ. Chuck was a phenomenal master carpenter and in his spare time built everything from baby cradles to their mountain home. He was a man of strong Catholic faith, a member of St. Therese parish, and served as a Grand Knight with the Knights of Columbus. In 2003, The Johnsons moved to Loveland where they have lived for the last 14 years. Chuck is survived by his wife, Betty; brother, Dale (Clara Beth) of Billings, MT, and seven children. He was a wonderful role model and father to daughters, Linda (Ron) of Westminster and Kathy (Paul) of Loveland, and sons Steve (Cindy) of Colorado Springs, John (Marylou) of Aurora, Jim (Lori) of Ft. Collins, Dan (Penny) of Yakima, WA and David (Debbie) of Boise, ID, 20 grandchildren and 10 great grandchildren. Chuck was loved by all who knew him and will be missed dearly. In lieu of flowers, please give to the Parkinson's Disease Foundation: 1359 Broadway, Suite 1509, New York, NY 10018 or www.pdf.org/fund. A Memorial Mass will be held on Friday, April 28th, 10:00 am at St. John the Evangelist Church, 1730 West 12th St. Loveland, CO 80537.

A truly remarkable man passed away peacefully on April 13, 2017 after a 12 year struggle with Parkinson's Disease. Charles (Chuck) Wesley Johnson was born May 17, 1928, the third of five sons of Louise and William Johnson. He was raised on... View Obituary & Service Information

The family of Charles "Chuck" Wesley Johnson created this Life Tributes page to make it easy to share your memories.