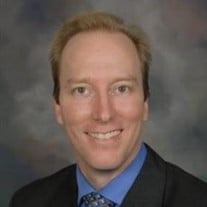 Chris passed away peacefully at home on April 23, 2020. He very much enjoyed life and living, but colon cancer determined he would get only 49 years, plus one month and fifteen days. He had every intent of accomplishing many more goals with his family and friends. To meet Chris was to instantly like him. He was a genuinely good person. He grew up in Arvada where he was the victor of many rubber band wars throughout elementary school, although rarely beat his cousins at Monopoly (just ask they’ll tell you). At an early age it was clear that he was an individual who would set high goals and achieve them. It was while in junior high that he decided he would become an optometrist, partially motivated by the family’s optometrist, Dr. Fukai. He moved to Fort Collins to attend CSU (Go Rams!). He met his love, Steph, and they both graduated in 1993. They married in 1994 while Chris attended Southern California College of Optometry. Then after he graduated with distinction in 1997, they returned to Fort Collins. He was a dedicated Ram fan through and through. Chris joined Eyecare Associates in 1998. He was a great eye doctor and partner. He won Colorado’s Young Optometrist of the Year, Optometrist of the Year, and was given a national award for his work with an infant eye care program. He took immense pride in his profession, serving terms as president of the Northern Colorado Optometric Society and president of the Colorado Optometric Association. He enjoyed seeing patients from infants through adults, finding ways to incorporate a magic trick during many visits. Chris was passionate about martial arts. He had received black belts in Tae Kwon Do, and Jujitsu and had been working toward a black belt in Karate with his friends at Total Ryu Martial Arts. He enjoyed planning ahead - the fun stuff (like camping) and the practical stuff (like buying a camper, fixing the camper, winterizing the camper, storing the camper, fixing the camper again, and selling the camper). Chris was always cheerful and optimistic. He was funny and enjoyed a good laugh, even at his own expense. He was a modest and humble human being, who led by example. While not a religious man, he treated every individual as he would want to be treated. There was not a person whom he could not sit down with and befriend with a respect toward their values. Chris was most proud of his two girls. He shared his enthusiasm for just about everything with them. He was a phenomenal dad, prioritizing dance competitions and soccer games over CSU Rams tailgates. He loved being part of their lives. He was so content just hanging around the house together with his family. He set an example as a father for all of us to follow. Chris is survived by his wife Stephanie, daughters Jillian and Jordyn, as well as his mom Sandy and brother Greg (Joan). His father Lowell preceded him in death. In lieu of flowers, Chris requested donations to a scholarship fund to be formed for pre-optometry undergraduates at CSU. Please make checks payable to CSU Foundation, in the memo line include "Chris Eddy Memorial Scholarship". These can be mailed to P.O. Box 273098, Fort Collins, CO, 80527. A gathering to share memories will be scheduled at a later date.

Chris passed away peacefully at home on April 23, 2020. He very much enjoyed life and living, but colon cancer determined he would get only 49 years, plus one month and fifteen days. He had every intent of accomplishing many more goals with... View Obituary & Service Information

The family of Christopher Lee Eddy created this Life Tributes page to make it easy to share your memories.