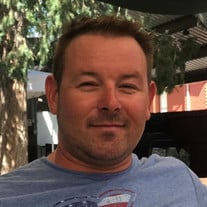 Christopher “Chris” John Govier, age 43, was called home by God in his restful sleep on Sunday, October 25, 2020 at his home in Fort Collins, Colorado. Chris was born in Glasgow, Scotland to Maureen Tiffoney and Christopher Govier Sr. He spent the first ten years of life in London before returning to Glasgow, where he became a 1993 graduate of John Street High School at Brighton Cross and attended Cardonald College. On a whim, 19-year-old Chris took a summer camp job overseas in Michigan, where he met his future wife Rachel. The outdoor-enthusiast couple married in December 1997 in Palm Bay, Florida and settled down in Fort Collins, Colorado, where they enjoyed many happy years and had four children together. By far his greatest and most joyous adventure, fatherhood was most important to Chris. His kids were his pride and joy. Known for his incredible work ethic, Chris was an Operations Manager for a large event company and Manager for WalMart Distribution before making a career shift into the oil and gas industry, where he served the last 6 years as a Solar Technician. Chris was an avid hiker, mountain biker, and skier. He was a lover of the mountains, skilled outdoorsman and spent time as river guide and trip leader -- a passion he shared with friends and family alike. Chris invested a great deal of time taking his children on long bike rides and challenging hikes. He loved to cook and feed people, especially his children. Words most often used to describe Chris are funny, kind, strong, generous and hard working. His children described Chris simply as “the best daddy ever.” Chris is survived by children Alannah (16), Lochlan (15), Grier (13) and Griffin (9); former wife of 18 years, Rachel Santiago-Govier of Donnelly, Idaho; mother Maureen Tiffoney of Glasgow, Scotland; foster mother Mary and family members Allan, Jennifer and Ryan Donald and Betty Paterson (preceded in death) of Glasgow, Scotland; father Chris Govier Sr. of Ilfracombe, England; Chris is also survived by his Maternal Aunts Mary Jackson and Jane (Tam) Mooney; Uncle James Tiffoney; his adoring cousins and all the family that will sorely miss him in Glasgow, Scotland; Paternal Uncle Michael (Clare) Govier of Okotoks, Alberta as well as a large, loving extended family of in-laws in the United States and group of friends in Colorado. A private memorial service will be held on November 21, 2020 at Our Lady of the Lake Catholic Church in McCall, Idaho, followed by interment at the Finn Church Cemetery. In lieu of flowers, contributions may be made to the Chris Govier Memorial College Fund, established in Chris' honor to benefit his children. Visit https://gf.me/u/y85qhq to contribute. The Govier family extends heartfelt gratitude to Goes Funeral Care in Fort Collins, Colorado, McCall Funeral Home in McCall, Idaho, and Father Bruno Segatta for help with the arrangements. The family also would like to thank Chris’ loyal friends in Colorado, Don Gomez and William Fleming for their assistance during this time. Warm thanks are also extended to the Brickner and Dickenson families, Chris’ cousin Karen Mooney in Scotland and the many other friends and family who have offered their support. https://gf.me/u/y85qhq

Christopher &#8220;Chris&#8221; John Govier, age 43, was called home by God in his restful sleep on Sunday, October 25, 2020 at his home in Fort Collins, Colorado. Chris was born in Glasgow, Scotland to Maureen Tiffoney and Christopher Govier... View Obituary & Service Information

The family of Christopher Govier created this Life Tributes page to make it easy to share your memories.