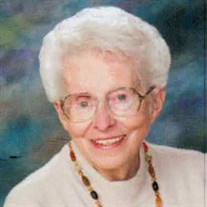 Clare Wilber, age 89, of Fort Collins, Colorado died on July 7, 2017. Visitation will be held at 6:00 pm and a vigil service at 7:00 pm Thursday, July 13th at St. Joseph Catholic Church. Mass of Christian Burial is at 10:00 am Friday, July 14th at St. Joseph Catholic Church. Interment will be held later in the Massachusetts National Cemetery in Bourne, Massachusetts where her late husband Charles is buried. Clare Marie O’Keefe was born on March 21, 1928 to Thomas and Kathleen O’Keefe in Denver, Colorado. After growing up in Colorado and graduating from Loretto Heights College in Denver, Clare left for New York to attend Fordham University on a scholarship, eventually earning her MS in Biological Sciences. It was also there that she met her husband, Charles Grady Wilber, better known as Charlie. Clare and Charlie married in June of 1952 in Denver and she then became mother to his two sons and daughter from a previous marriage. Prior to meeting Clare, Charlie had served in the Air Force during WWII and was widowed when his previous wife passed away. After marrying, he and Clare went on to have four more children together, two daughters and two sons. The house was full and the family joyful. They moved back to Colorado in 1967, but their love for the northeast remained. They spent many summers at their cottage in Woods Hole, Massachusetts. Lots of fond memories were made at that cottage with family, friends, and the lovely sights and sounds of the Cape. Clare’s keen mind and love of biology were an asset to her when she became a professor at Loyola College in Baltimore, Maryland, but her talents didn’t stop there. Clare’s true passion was music; she actually had perfect pitch, a rare gift. Besides being a music teacher, Clare managed the Fort Collins Symphony for 16 years. She also lent her musicianship to the choir at St. Joseph Catholic Church in Fort Collins. A devoted member of the St. Joseph community, Clare will be missed by those who looked forward to seeing her at Mass, singing with her in the choir, and sharing with her in their faith. Clare is survived by her daughters, Maureen Wilber of Bremerton, WA; Kathleen (Bob) Steinbaugh of Huntington Beach, CA; and Aileen Chaltain of Hanover, NH; and sons, Charlie Wilber of Fort Collins; Michael (Ann Marie) Wilber of Wilmington, DE; and John Wilber of Kittridge, CO; grandchildren, Ariadne Wilber; Christine Steinbaugh and Michael Steinbaugh; Kelly Ann Wilber and Matthew Wilber; Kathleen Wilber and Adam Wilber, Grady Chaltain and Tori Chaltain; great grandchildren Carter, Alina, Marina, Ben, and Mikey. She was preceded in death by her husband, Charles Grady Wilber, and infant son, Thomas Grady. Join us in remembering Clare – her smile, her voice, her mentorship, and her love. In lieu of flowers, please send donations in Clare’s memory to Fort Collins Symphony or Colorado State University Music Department.

The family of Clare Wilber created this Life Tributes page to make it easy to share your memories.