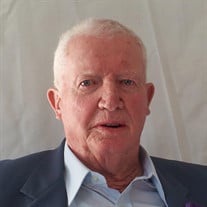 Clarence (Buster) Franklin Norris (92) passed peacefully on April 25, 2019, from Parkinson’s disease and a severe foot wound. Buster was the fourth of eight children born to William Franklin and Daisy Myrtle (Howe) Norris at home, south of Manzanola. After graduating from Swink High School in 1945, Buster served in the Marines as a firefighter and Military Police officer at Quantico, Virginia until April, 1946, after WWII ended. Buster married Doris Nyletta Sackett on January 20, 1946; they divorced in 1969. Buster was a successful farmer, well-known for the watermelons and cantaloupes he grew. He expanded his land into a thriving 360-acre farm and cattle operation. Buster and Doris raised four children; Sheila (Fulton), Linda Norris, Pamela (Worster) and Eldon Norris. Buster served on the Swink School board from 1960-1966. Buster later sold the farm to his partner and started his next career; owning two successful bars, offering live music and food, in Rocky Ford. Buster married his second wife, Barbara Ginther, in 1970. After retiring, Buster and Barbara bought a motor home and enjoyed fishing and traveling. Buster was a great father, and a mentor, teacher and friend. He often helped people who needed a hand up. Buster enjoyed taking a WWII Honor’s Flight to Washington, D.C. in 2014. Shortly thereafter, he and his brother Delbert moved to northern Colorado to be closer to his children and receive medical care. Buster was proceeded in death by his parents, his sisters Margaret (McCray), Vivian (Britton) and Janet (Critchfield), his half-sister Ora May (Sheppard), his brothers Earl and Gene, and his second wife, Barbara. He is survived by his four children, his sister Elizabeth Helen (Betty Bunch), his brother Delbert, nine grandchildren, eleven great-grandchildren, nieces and nephews, and his first wife and friend, Doris. Donations may be made to Pathways Hospice or a hospice agency or charity of your choice, or the Swink school library. A service and internment will be held at the LaJunta Fairview Cemetery on June 1.

The family of Clarence Franklin Norris created this Life Tributes page to make it easy to share your memories.