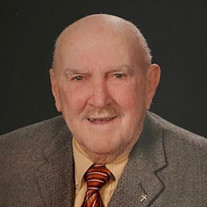 Clyde Hubert Gleason, a loving 88-year-old husband, father, grandfather, great-grandfather, brother and uncle was surrounded by family when he passed away on Monday, November 16, 2020 at his residence in Fort Collins, CO. Clyde was born in Guide Rock, Nebraska in 1932 to Clifford and Cleone Gleason and was one of four children. As a child he enjoyed hunting with his dog, Sooner, and eating Gooseberry pie. He was mischievous at times and loved sharing many memorable moments. It seemed that Sooner and Clyde often found themselves in predicaments that they couldn’t escape without real consequences, like the time when Sooner encountered a skunk and yes they soon found themselves taking a tomato bath. His early school age years were spent in a one room schoolhouse. Clyde’s family later moved to Hardy, Nebraska where he graduated high school in 1950. From 1952-1956 Clyde served in the U.S. Navy. He was aboard an aircraft carrier, the USS Kearsarge, during the Korean War. On one of his trips home he met his future bride-to-be. Clyde married Joan Himmelberg in May of 1955 and together had nine children. They raised their children in the Catholic faith. Clyde worked as a Construction Engineering Technician for the Department of the Interior, Bureau of Reclamation. This work took he and his family to many unforeseen places one of which was Salida, Colorado, in 1966. Upon retirement from the Bureau of Reclamation, he and Joan remained in Salida. Too young to be completely retired, Clyde took a job working for ASI Construction in Buena Vista, CO. He finished out his career with ASI and retired in 2004. While in Salida he found himself involved various clubs. For a short time, Clyde was part of the Shavano Indian dancers, a scout group, where he handmade a variety of costumes, which are still enjoyed by his family. He was also a member of the Knights of Columbus and the Elks Club lodge where he grew many friendships. While in Salida he enjoyed teaching his boys how to enjoy the outdoors, which included hunting, fishing, trapping, camping and golfing. In 2004 Clyde and Joan made a move to Greeley, CO where he continued making memories with his family, spending time in the duck blind trolling the lake for Walleye, and cheering on the Broncos and Rockies. His later years of retirement were spent in Fort Collins, CO where he was able to be with his children, grandchildren and great-grandchildren. He adored his wife and loved his family, and often said that he would never have been the man he was had it not been for “his sweetheart”. Clyde is survived by his wife Joan, nine children: Donald Gleason, Denise and (Rex) Bell, Renee and (Ed) Holloway, Daniel and (Debra) Gleason, Richard and (Cindy) Gleason, Rhonda and (Jeff) Wolff, Timothy Gleason, Thomas and (Rose) Gleason, Kimberly and (Chris) Cribari; thirty grandchildren, forty-one great-grandchildren, a sister Linda and numerous nieces and nephews. Clyde was preceded in death by his parents Clifford and Cleone Gleason; brothers Jim and Ron Gleason; his in-laws George and Hilda Himmelberg; granddaughters Katelyn Jardine and Stephanie Gleason; as well as great-granddaughters, Adalynn Maline and Rose Gleason. Clyde remained a devout Catholic and had a strong love for the Lord. Rosary will begin at 9:30 am Friday, April 16, 2021 at Saint Elizabeth Ann Seton Catholic Parish in Fort Collins, CO followed by Memorial Mass at 10:00 am. Interment is scheduled same day for 11:45 am at Grandview Cemetery, also in Fort Collins, after Church services complete. Family kindly requests continued prayers and if you feel inclined to donate in Clyde’s memory, family suggests that those be sent to Saint John XXIII Catholic Church, Ram Catholic, 1220 University Ave. Fort Collins, CO 80521. Check to be written to Ram Catholic or you can donate via their website at saintjohn.church.

Clyde Hubert Gleason, a loving 88-year-old husband, father, grandfather, great-grandfather, brother and uncle was surrounded by family when he passed away on Monday, November 16, 2020 at his residence in Fort Collins, CO. Clyde was born in... View Obituary & Service Information

The family of Clyde Gleason created this Life Tributes page to make it easy to share your memories.