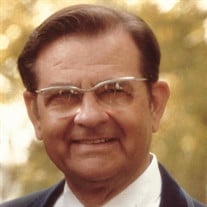 Clyde Wendell Gundlach, “CW,” 91, of Fort Collins passed away peacefully with his family by his side on June 8, 2017. He was born March 15, 1926 in Chicago, worked and raised his four children in South Bend, Ind., and retired to Fort Collins, Colo. Clyde is the son of Louis John Gundlach and Lillian Saunders of Chicago. He had one brother, Bryon, who preceded him in death. Clyde served as a military police officer in the Army during World War II. Following the war, he attended Iowa State University on a golf scholarship. He earned his Bachelor of Science Degree in General Engineering. Following graduation, he began his career with Armstrong World Industries in San Francisco and worked in sales and marketing. While living in San Francisco in 1952, Clyde was introduced to Ann Catherine Clark. He said “He was immediately captivated by Ann.” They married on June 23, 1953, in Pittsburgh, Pa., Ann’s hometown. Together, and for a short time, they lived in San Mateo, Calif., before Clyde and Ann relocated to South Bend, Ind. Clyde worked for Armstrong World Industries for 35 years. Following his retirement from the company, he started his own independent sales business in manufacturing. He also stayed current in finance and business, investing and trading in the financial markets. In 1997, Clyde and Ann moved to Fort Collins, Colo., to be close to their family, mountains and fly fishing. They loved to explore the Western United States and visit grandchildren. In May 2002, Ann passed away. Clyde remained in his Fort Collins home until his death. Clyde enjoyed watching baseball and college football, collecting duck decoys, stamps and Boehm duck plates. He had a heart for the outdoors and supported the Nature Conservancy and Ducks Unlimited. Survivors include Clark William Gundlach (son) and Pam Preble Gundlach of Eagle, Colo.; Catherine Ann Gassman (daughter) and Barry K. Gassman of Edwards, Colo.; John Charles Gundlach (son) and Frances Kerl-Gundlach of Rancho Cucamonga, Calif.; Elizabeth Gundlach Alexander (daughter) and Charles Alton Alexander of Windsor, Colo.; and, 10 grandchildren and four great-grandchildren.

The family of Clyde Wendell Gundlach created this Life Tributes page to make it easy to share your memories.