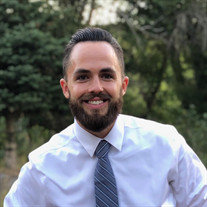 With the deepest sorrow, we announce that Connor Mario Melendez, age 29, our beloved son, brother, family member, and friend passed suddenly while peacefully sleeping on Sunday, December 22, 2019, in Fort Collins, CO. Connor was completing his degree, double majoring in accounting and finance at Colorado State University in Fort Collins, CO. He had just completed an internship this past summer with Ernst & Young LLP in Denver and was selected amongst the many candidates and rewarded with an employment offer starting August 2020. Connor was ecstatic and proud of his accomplishments and the opportunity to work with EY. He was a veteran who proudly served his country with the United States Air Force. Soon after his honorable discharge from the Air Force, he embarked on a journey out west that landed him in Fort Collins. His love for nature, the outdoors, and everything that God has created are evident to all who knew him. His dreams after college were to take full on his career with EY and set roots in his beloved Colorado. Those that knew Connor have lost a shining light in their lives. His zest for life, love for his family, friends and loved ones were at the core of his being. He leaves behind a void in our lives that is not soon to be filled and may never be. He was larger than life! Connor will forever be missed by his friends and his whole family, especially his father, Fernando Melendez, his mother Patricia, his bonus mom, Jeannie, his brothers Christopher, Austin, Andrew, and his sisters Danielle and Stephanie and his beautiful girlfriend Bailey. We LOVE you, Connor!!! Build Me a Son, O Lord Build me a son, O Lord, who will be strong enough to know when he is weak and brave enough to face himself when he is afraid; one who will be proud and unbending in honest defeat, and humble and gentle in victory. Build me a son whose wishbone will not be where his backbone should be; a son who will know Thee and that to know himself is the foundation stone of knowledge. Lead him, I pray, not in the path of ease and comfort, but under the stress and spur of difficulties and challenges. Here let him learn to stand up in the storm; here let him learn compassion for those who fail. Build me a son whose heart will be clean, whose goal will be high; a son who will master himself before he seeks to master other men; one who will learn to laugh, yet never forget how to weep; one who will reach into the future, yet never forget the past. And after all these things are his, add, I pray, enough of a sense of humor, so that he may always be serious, yet never take himself too seriously. Give him humility, so that he may always remember the simplicity of greatness, the open mind of true wisdom, the meekness of true strength. Then I, his father, will dare to whisper, “I have not lived in vain.” (General Douglas MacArthur)

The family of Connor Mario Melendez created this Life Tributes page to make it easy to share your memories.

With the deepest sorrow, we announce that Connor Mario Melendez,...