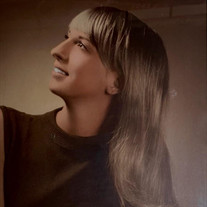 On Wednesday, February 17, 2021, Corliss “Corky” Ann Pappas, loving wife, dedicated mother, grandmother, sister and friend, passed away peacefully at home surrounded by her husband and kids at the age of 69. Corky was born on August 21, 1951 in Saint Francis, Kansas to Neel and Evelyn Leathers. They moved to Holyoke when she was 5 years old. She enjoyed growing up there and made many lifelong friends. She graduated from Holyoke High School in 1969. While attending Northeastern Junior College where she met Michael (Mike) Wayne Pappas. The two were inseparable from that point on. On October 31, 1970, in Denver, Colorado they were married. They recently celebrated their Golden wedding Anniversary. In the early years of their marriage they moved around residing in Greeley, Yuma Colorado, and Chappell, Nebraska. In 1978, they relocated to Fort Collins, Colorado where they made their permanent home. Together they raised two daughters, Michelle and Anne, and two sons, Justin and Jason. Corky had a successful career as a real estate broker. In 1978, she began her real estate career at Gallatin Real Estate. She moved to Dillon Vaughn Walters (DVW), Linda Hendricks Real Estate, Affiliated Acquisitions and then Coldwell Banker Everitt Companies. She held many positions with the Fort Collins Board of Realtors including Director and won Citizen of the Year. Corky was Director and Founder of Brokers’ Reform and Secretary for Fort Collins Exchangers. Corky went back to college and earned an Associates in Science and Business. She aspired to work in robotics helping design prosthetics. She graduated top of her class ans was a recipient of Presidents Award, Phi Theta Kappa Sorority and National Dean’s list. Life happened and she eventually found herself back in the real estate industry. She opened The Mortgage Connection, Inc. She enjoyed being an entrepreneur, and helping clients acquire mortgages until the financial crisis hit. She continued to consult for several years. Her declining health kept her close to home. Corky had a passion for plants, gardening, music, and a love for dogs, birds and horses. She was a ferocious reader and a constant student. She enjoyed simple pleasures like relaxing at home, quiet evenings with a good movie or a television series. She was known for her quick wit, her infectious smile, great sense of humor, intelligence, and her kind and compassionate spirit towards everyone. She loved and trusted Jesus Christ as her lord and savior and saw the beauty in every one of His creations. Corky was preceded in death by her father, Neel Leathers, and mother, Evelyn. Her father in law; Frankie Pappas and recently, her mother in law; Lorraine Pappas. She is survived by her husband Mike and her four children: Michelle Hubbard (Jeff Hubbard), Justin Pappas, Jason Pappas (Melissa Hudson) Anne Spry (Jared Spry) all of Fort Collins, CO. Her sisters Coniss Lanckriet (Larry Lankriet) Weldona, CO and Candiss Leathers Millenbach (Jack Millenbach) of Littleton, CO and several cousins, nieces, and nephews. She was most proud to be a Grandma to Ty and Tristan Hubbard, Mackenzie and Keagan Pappas, Kael, Kai, and Kolby Spry. Corky is deeply missed, the hole left by her absence is impossible to fill. A celebration of life will be held on Friday, March 5th, 2021 at the Faith Church 3920 S Shields Street Fort Collins, CO at 11:00 a.m.

On Wednesday, February 17, 2021, Corliss &#8220;Corky&#8221; Ann Pappas, loving wife, dedicated mother, grandmother, sister and friend, passed away peacefully at home surrounded by her husband and kids at the age of 69. Corky was born on August... View Obituary & Service Information

The family of Corliss (Corky) Ann Pappas created this Life Tributes page to make it easy to share your memories.