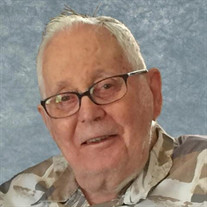 Curtis Norskog, 93, formerly of Willmar, Minnesota died Tuesday, April 21 at Centre Health and Rehab in Fort Collins, Colorado following a period of declining health. A service will be held in the future when family and friends can attend at Calvary Lutheran Church of Willmar. Arrangements will be handled by Harvey Anderson & Johnson Funeral Home in Willmar. Curtis was born November 14, 1926 in Hector, Minnesota to Olaf and Anna Norskog. He attended country grade school and graduated from Bird Island High School in 1944. He served in the U.S Army at Fort Belvoir, Virginia for about two years. After the army, he went to the University of Minnesota and graduated with a BS degree in Agronomy in 1951. In 1952 he began his career with Pioneer Hi-Bred International as an assistant in research at Pioneer’s Research Station in Willmar and retired in 1986. On March 28, 1953 he married Marian Jeseritz at St. John’s Lutheran Church in Wood Lake, Minnesota. Curt was a member of Calvary Lutheran Church in Willmar and served in various positions including Sunday School superintendent, Congregational president, taught the Bethel Series and was a Stephen’s minister and in later years was president of NTY (Senior church group). He was a member of the American Legion Post 167 of Willmar, Willmar Kiwanis, Little Crow Photography Club and the Corn Items Collectors Association. He also worked many years helping build houses for the Willmar Habitat for Humanity Chapter. His interest in wild flowers led him to start a wild flower garden at Rau Park in Willmar and at the Kandiyohi Historical Society as well as with wild flowers around his back yard. Curt would put on slide shows using 4 projectors to various senior groups and banquets. He published a book on the history of over 500 seed corn companies. A collector of corn memorabilia, he had at one time a large collection of cloth seed corn sacks, seed corn signs and corn pottery. He was preceded in death by his wife Marian on November 22, 2009, his sister Marcella Kallevig of Richfield, Minnesota and his parents. He is survived by children Allen (and Marge) Norskog of Fort Collins, Colorado, Bruce Norskog of Malden, Massachusetts, and Carmen (and Phil) Thies of Huron, South Dakota. He is also survived by grandchildren Amy (and Ross) Koenigs of Fort Collins and Justin, Kaison, and Hannah Thies in South Dakota. Curt moved to Winslow Independent Living in Fort Collins in June 2010 and later to New Mercer Assisted Living in February 2015. The family suggests memorial contributions be made to Calvary Lutheran Church or to Habitat for Humanity or charity of your choice.

Curtis Norskog, 93, formerly of Willmar, Minnesota died Tuesday, April 21 at Centre Health and Rehab in Fort Collins, Colorado following a period of declining health. A service will be held in the future when family and friends can attend at... View Obituary & Service Information

The family of Curtis Willard Norskog created this Life Tributes page to make it easy to share your memories.