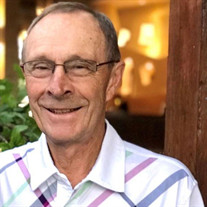 Dale D. Olhausen, beloved husband, father, and grandfather, of Loveland, Colorado, age 85, passed away suddenly of acute leukemia (ALM) on July 12, 2020, at McKee Medical Center in Loveland, Colorado. He was born January 24, 1935 in Hartley, Iowa to Edward and Leona Olhausen. He attended grade school through high school in Hartley. He played multiple sports, but was most proud of being undefeated during his three years as quarterback. Dale received his bachelor’s degree in 1957 from South Dakota State University in Civil Engineering. He remained very involved with college sports including football and lettered in wrestling, track and field. Growing up on a farm taught Dale about hard work and dedication to achieving one’s goals. He admitted to being a workaholic and never wanted to waste a day. After college graduation, Dale moved to Los Angeles, California for his first job as Design and Project Engineer for Los Angeles County, Waterworks and Utilities Division (1957-1962). He also did graduate work involving advanced sanitary engineering design, hydraulics and structures at the University of Southern California. Dale married Lynn Schroeder, his high school sweetheart, on June 14, 1958 at St. Paul’s Lutheran Church in Hartley. In 1962, they moved to Greeley, Colorado where Dale had taken a position with a private engineering firm. From the time he was in college, Dale had a desire to own his own company and realized his dream in 1967 when he founded Rocky Mountain Engineering in Greeley. Dale also designed and managed Central Weld County Water District for 20 years. In 1969, the partnership of Hogan and Olhausen was formed in Loveland, Colorado, and the family moved there in 1970. The business split in 1982 when Dale established Landmark Engineering. In 2002, Dale “retired” and sold his Landmark stock to his son and other members of the firm. Regardless of Dale’s leadership and accomplishments, he always attributed Landmark’s success to his loyal employees. Dale was a registered P.E./L.S. in Colorado as well as a P.E. across multiple states. His areas of expertise included sanitary, hydraulic, and municipal engineering, land development, technical administration, and management. He was affiliated with American Consulting Engineers Council, Certified Engineers of Colorado, American Society of Civil Engineers, American Water Works Association, Water Pollution Control Federation, National Association of Homebuilders, Urban Land Institute, American Council of Independent Laboratories, Inc., and the American Academy of Environmental Engineers. It was important to Dale to give back to his community through his involvement and roles with multiple organizations: Loveland Economic Development Council Director, Loveland Development Fund Director, Loveland Good Samaritan Retirement Village Advisory Board Secretary, Rotary Club, Chamber of Commerce Director, Consulting Engineers of Colorado Director, Commissioner and President for Certified Engineers of Colorado, Loveland Water Board President, and a participant with the Water Pollution Central Delegation to China People to People Program. In 1986, Dale purchased the land for and ultimately engineered and developed Macy Village and Backbone Meadows subdivisions in Loveland. Most recently in 2018, he and Lynn created an endowment at South Dakota State University and awarded the first Dale and Lynn Olhausen Scholarship in Civil Engineering to financially aid deserving engineering students. Dale had a strong faith and held numerous church council positions and other volunteer roles with the Lutheran churches he attended over the years. He was a charter member of Gloria Christi in Greeley, a former member of Immanuel and King of Glory in Loveland, and most recently a member at Redeemer in Fort Collins. His multiple hobbies and interests encompassed spending quality time with his family, hunting, fishing, golf leagues, bridge groups, and domestic/international travel. Some highlights of Dale’s travels included family excursions to Mexico, family ski trips, visiting his daughters as exchange students in Ecuador and Denmark, Canadian fishing trips with his son, son-in-law, and grandson, and many adventures abroad with Lynn. He was a devoted Broncos fan, an avid reader, loved Western movies and books, and listening to instrumental music. Anyone who knew Dale, knew he had a passion for golfing and an obsession for retrieving stray golf balls, witnessed by the multiple 5 gallon buckets stored and categorized in his garage. He played at every opportunity, including playing 18 holes a few days before he passed. A highlight for Dale was the many years spent wintering in Green Valley, AZ golfing. Hopefully, St. Peter has already supplied him with his new retriever. Left to cherish his memory are his wife Lynn of 62 years, and their children, Jill Olhausen of Frisco, TX, Jeff Olhausen of Loveland, CO, Judy Weaver and husband, Jason Stewart of Loveland, CO, and grandchildren Colton and Cassidy Weaver of Loveland, CO; also younger brother Roger (Rose) Olhausen of Jefferson, IA, sister-in-law Connie Olhausen of Hartley, IA, and many relatives and friends. He was preceded in death by his parents, older brother Cloy, and son-in-law, Matt Weaver. Due to Covid restrictions, a private family service and inurnment will be held. In lieu of flowers, memorials can be made to the Dale and Lynn Olhausen Scholarship in Civil Engineering, Redeemer Lutheran Church, or a charity of your choice honoring Dale’s memory. “You never leave a place you love, you go away, taking a part of it along and leaving a part of you remaining.”

The family of Dale Dean Olhausen created this Life Tributes page to make it easy to share your memories.