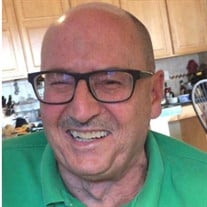 Dave Heyman, born December 28, 1950, passed away July 30, 2020, peacefully at home with his family in Fort Collins, Colorado. He is survived by his wife, MaryAnne (Hug) Heyman, of Fort Collins, Colorado. He is also survived by his children’s families, including Claire and Matthew Boyles, of Loveland, Colorado; Zac Hug and Daniel Park, of Los Angeles, California; as well as Maggie and Daniel Hotch, of Klukwan, Alaska. Known as Pop to his grandchildren, Madzie, Simon, Raven, Michaelene, and David Anthony, Dave leaves behind a legacy of kindness, grit, and patience. Born in Norwalk, Ohio, to Ruth (Camp) Heyman and Delbert Heyman, Dave attended St. Paul’s High School, as did his surviving siblings: John Heyman, Cathy Mellen, Marcia Strall, and Sue Fenwick. Dave was an All-American High School Football player in 1968, served in the United States Army, and later worked for Hug Concrete Paving in Norwalk. Despite numerous health challenges throughout his life, Dave Heyman was always the loudest laugh in any room. An active swimmer, Dave Heyman loved sunbathing, Pepsi, The Simpsons, having a dog around the house, and the Green Bay Packers. He took great delight in making a baby in a stroller laugh whenever he got the chance. He was an ardent optimist and had two favorite words: “patience” and “MaryAnne.” The Heymans spent the better part of their marriage in a relentless pursuit of happiness: traveling the United States, moving their family to Lake Tahoe, and finally settling in Fort Collins, Colorado. Though medical personnel often referred to MaryAnne as his “primary caregiver,” Dave was always adamant that they call her his wife. They were married for 46 years. An online celebration of Dave’s life will be held on August 23rd that will go live at 3pmPT/6pmET (so 4pm Colorado time). Access the online celebration here: https://www.daveheymanmemorial.com. In lieu of flowers, donations can be sent to Operation Homefront, which helps provide housing for veterans and military families at operationhomefront.org.

The family of David Lynn Heyman created this Life Tributes page to make it easy to share your memories.