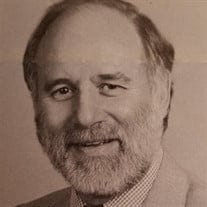 David passed away peacefully on July 17th at Windsong Memory Care Home in Fort Collins, CO where he had been since April. He was almost 83, and had Alzheimer’s Disease for many years. He is survived by his wife Jenny of 57 yrs, their 3 children, Peter, Ruth (Justin) and Andrew, and 3 grandchildren Kate, Julian and Nathan. He was born in London in 1936, however, much of his early schooling was spent in Blackpool during the war. Later returning to London, he finished school and decided to make a career in medicine. After qualifying at King’s College he did his internship at St.George’s Hospital. It was here that he met his wife who was a nurse. Following a 5 yr residency in Bristol, he was given the opportunity to take a year's fellowship at the Children’s Hospital Medical Center in Boston, MA. There he met a friend and colleague who suggested he spent a year at the Hospital for Sick Children in Toronto, Canada. David was offered a full time position, and the family decided to make a permanent move to Canada. As a clinical assistant, David specialized and set up the first non-cardiac children’s ultrasound department, where he worked for 13 yrs. In 1983 the family moved to Ottawa where he again set up a similar ultrasound dept. at the Children’s Hospital of Eastern Ontario. Eight years later, he made a further move over the border to Buffalo, New York, continuing in diagnosing medical conditions in children with ultrasound. He spent 17 yrs at the Buffalo Children’s Hospital, continuing to teach medical students, residents and fellows, until his retirement in 2008. He authorized numerous publications, engaged in many research projects, was an invited lecturer at training courses in ultrasound around the world. David often expressed how surprised he was at his good fortune in life and was always very humble about his successes. He was a true Brit. in every way, with a good sense of ‘slap stick’ humor. When their children were young, David and Jenny together organized camping trips every summer for the family which included many throughout Canada, and one right across North America where the whole family had a chance to see many diverse landscapes and wildlife. He was always tethered back to the UK, with frequent visits, and when back in North America, David continued to listen to the daily BBC news and watch British streamed television. Music was always a favorite of David’s throughout his life. Together the family enjoyed going to watch the symphony. He also enjoyed watching his children learn to play their instruments. David never missed a chance to kick a soccer ball around with his three children and grandchildren. He helped to coach their teams when they were young in Toronto, always encouraging them to learn to kick with both feet. Although sports was always a great way to spend time together, David was a huge advocate with his children’s education. He was generous with his time at home reteaching skills from school when needed throughout their educational paths, and even teaching them how to drive. Jenny and David spend time going to plays, with frequent visits to Niagara on the Lake and Stratford, Ontario, which they both looked forward to every summer. He will be missed by all. Donations may be made in his honour to any children’s charity of choice.

David passed away peacefully on July 17th at Windsong Memory Care Home in Fort Collins, CO where he had been since April. He was almost 83, and had Alzheimer&#8217;s Disease for many years. He is survived by his wife Jenny of 57 yrs, their... View Obituary & Service Information

The family of David John Martin MD created this Life Tributes page to make it easy to share your memories.

David passed away peacefully on July 17th at Windsong Memory...