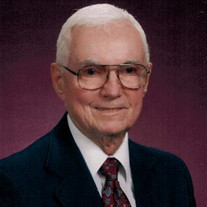 David Edward White, 92, from Fort Collins, Colorado died October 13, 2016 at his home. He was born on October 3, 1924 in St. Louis, Missouri to Ralph DeMay White and Florence Maralmin Roberts White. David was raised with his brother, DeMay “Dee” Hervey White and graduated in June 1942 from Maplewood-Richmond Heights High School. David attended the University of Missouri for one semester before he enlisted in the U.S. Army. He proudly served in the Pacific Theater during WWII and was Honorably Discharged on January 27, 1946 with the rank of Technician Fourth Grade. David was awarded three Bronze Stars and the Good Conduct Medal in 1945 for his service in the South Philippines, New Guinea and Luzon Campaigns. He was entitled to wear the Asiatic Pacific Theater Campaign Ribbon, the Philippine Liberation Ribbon and three Overseas Service Bars. David later attended Washington University on the GI Bill; graduating in June 1949 with a Bachelor’s Degree in Chemical Engineering. After graduation, David worked his first job at Firestone in Akron, Ohio. Later, he heard about an opportunity in Oak Ridge, Tennessee and said, “It sounded interesting.” So, he accepted the job with the Oak Ridge K-25 Gaseous Diffusion Plant, operated first by Union Carbide, then Martin Marietta and finally, Lockheed-Martin. David received numerous patents for his work with Gaseous Diffusion, Barrier Technology and Metallurgy. He was awarded a Technical Achievement Award; he always loved his work. David met his lovely wife, Betty at Loveman’s Department Store in Oak Ridge, while shopping for Christmas cards; they were introduced by a mutual friend. In 1962 their daughter, Linda was born and in 1965, their other daughter, Janet was born. The family always enjoyed each other’s company and loved camping and traveling to historical sights when they went on vacation. David was active in the First United Methodist Church of Oak Ridge and the Oak Ridge Heritage and Preservation Association with his wife, Betty. Together, he and Betty enjoyed traveling and went on several Elderhostel trips. David participated in Honor Flight. He was on the first Honor Flight trip to Washington D.C. from East Tennessee. He was a lifetime member of the National Rifle Association and the Oak Ridge Sportsmen’s Association, competing in local, regional, and national shooting events. David won numerous medals and trophies in pistol and high power rifle competitions. He was a skilled woodworker and crafted school desks and quilt racks for his daughters, Linda and Janet, and even made a set of uneven parallel bars for Linda’s gymnastics. David designed and built (along with other dads) an interactive model rocket with lights and switches for Janet’s 1st grade class. This rocket is on display at the Oak Ridge Children’s Museum. He was very involved with The Holiday Bureau, restoring bicycles, tricycles, scooters and wagons to near perfection. David was an avid reader and he especially enjoyed mysteries and history books. He also loved working on crossword puzzles in pen and playing board games with family. David had a wonderful sense of humor and is known for making puns. However, he will always be remembered for being a great dad! He taught both daughters how to change tires and oil on cars. He also taught Janet woodworking and riflery. David made the best and the highest tire swing ever! David is survived by his daughter, Linda (Roger) Billica of Fort Collins, Colorado; daughter, Janet (Dave) Wilson of Middlesex, New York; granddaughter, Caitlin of Fort Collins; nieces, Gail (Rick) Long, Marilyn White, Vivian (Michael) White and Julie (Sandy) Chace. He is predeceased in death by his wife, Betty; brother, DeMay “Dee;” niece, Judy. A Visitation is scheduled for 12:00-1:00 PM, Funeral to follow at 1:00 PM, Saturday, October 29th at the Weatherford Mortuary, 158 S. Jefferson Circle, Oak Ridge, Tennessee. Burial to follow at 3:00 PM at the Oak Ridge Memorial Park, 1501 Bethel Valley Road, Oak Ridge. The family request that in lieu of flowers, monetary donation or toys be given to The Holiday Bureau in David’s name. The mailing address is P.O. Box 7120, Oak Ridge, Tennessee 37830; phone: 865-483-7831.

The family of David Edward White created this Life Tributes page to make it easy to share your memories.