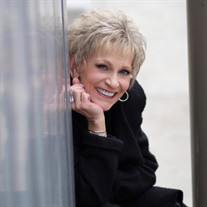 Dawn Renee Younger went home to be with Jesus on November 4th, 2021 at a vibrant 66 years young in Fort Collins, CO. She was born on June 15th, 1955 in Campbell Minnesota where her parents homesteaded. Over the last 17 months, she battled stage 4 metastatic breast cancer which then spread to her liver but she fought with such grace and faith until her last breath. Dawn graduated from Campbell Tinta high school in 1973 where she was actively involved with cheerleading, choir, drama, band (flute) and also was a majorette. She LOVED to sing and would often sing with the stage band and for theater plays in high school as well. That love of singing carried on through her life as she sang at numerous funerals, weddings, Scheels awards banquets and was a part of worship teams at church. She also sang and participated in many church productions where she helped with costume design and vocals. Gifted in singing like you wouldn’t believe, her heart was to worship and give all glory to Jesus as she blessed so many with her anointed voice. After high school she went on an pursued cosmetology at Josef’s School of Hair Design in Fargo, ND. She opened her own salon called “DAYBREAK”, named to represent the first light of day (the “Dawn”), in Pelican Rapids Minnesota after graduating with her cosmetology degree. After a few years, she moved back to Fargo, ND where she worked at Headhunters Salon up until she had her first baby girl Charia Dawn. She worked as a single mom for a few years at Blue Cross Blue Shield and then moved down to Sioux Falls, SD where she re-married and then established her life having two more beautiful baby girls, Lindsey (Anderson/Eisenbraun) and Alleise (Anderson). After 17 years of living in Sioux Falls, she moved back home to Fargo/Moorhead where she was able to be closer to family and usher both her parents into heaven during the eight years she was back. Her life then took a sudden turn as she took a leap faith and followed her middle daughter Lindsey and her husband (David) out to Colorado in 2015. She wanted nothing more than to have all her girls in the same place again, and spent a couple years praying and convincing her other two daughters, Charia and Alleise, to move to Colorado as well. Since then, they all welcomed her first two grand babies (Shepard Lee & Avaley Joy) and have been able to fulfill her desire of having all her girls together again. Second only to Jesus, Dawn’s greatest passion were her girls, and being a stay at home mom gave her so much joy. Never did she fail to be present in their daily lives. From early morning wakes up, to making lunches, to decorating Valentine’s day boxes for school competitions, to attending their sporting events, to chaperoning field trips, etc. Dawn was always there to make sure her girls were taken care of. In the midst of raising three beautiful daughters, she adopted many more of their friends and always welcomed them in and loved on them with open arms. Throughout her life, her compassion and love for Jesus was exemplified in her servant’s heart as she portrayed this so well in everything she did. Her motto was to “Be Jesus with skin on, everywhere you go.” Many who met her were drawn to the beauty and light of the Lord that she carried, and the effortless love that she gave so freely. The best memories her girls carry of her are the many jokes, “skits” and all around laughter she never failed to bring. Her favorite place to be was always on the lake and often talked about how someday her home would be there. Although we grieve and miss her presence deeply, our confidence is in knowing she is where her heart has always longed to be; in the arms of her Heavenly Father, dancing and worshiping in her new home on the lake (cancer free)! She is preceded in death by: Eileen Younger (Mother), Burton Younger (Father), Jack Anderson (Brother-in-law), Aaron Labrensz (Nephew) She is survived by: Charia Anderson (oldest daughter), Lindsey and David Eisenbraun (middle daughter), Shepard Eisenbraun (Grandson), Avaley Eisenbraun (Granddaughter), Alleise Anderson (youngest daughter), Debbie and Kent Roesler (oldest sister), Melissa and Vern Rossman (niece), Ryan and Julie Anderson (nephew), Denise and Jeff Labrensz (middle sister), and Allison and Matt Pfeiffer (niece). A Celebration of Life will be held, starting at 3:00 pm, Friday, November 12, 2021 at City Point Church (5656 McWhinney Blvd, Loveland, CO 80538).

Dawn Renee Younger went home to be with Jesus on November 4th, 2021 at a vibrant 66 years young in Fort Collins, CO. She was born on June 15th, 1955 in Campbell Minnesota where her parents homesteaded. Over the last 17 months, she battled stage... View Obituary & Service Information

The family of Dawn Younger created this Life Tributes page to make it easy to share your memories.

Dawn Renee Younger went home to be with Jesus on November 4th,...