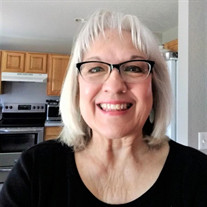 Deborah Kay Bailey was born on a snowy night on March 4, 1952 in St. Joseph, MO to Fay and Isabelle Cochran. She was the fifth of six children and grew up in Harrisburg, MO. She married Chris Crawford in 1971 and together they had a son Michael. They later divorced and she moved to Iowa in 1978 where she attended Muscatine Community College. It was there where she met Matt Bailey in a class called Synergistics. The class was small and everyone got to know each other pretty well. As it turned out, they had quite a bit of synergy. The two were interested in each other and she was waiting all semester for Matt to ask her out. Being a typical guy, Matt was a little slow to realize this beautiful girl was interested, but finally asked her out to lunch. She accepted the invitation and they had lunch together at a Mexican restaurant. Debbie did not eat much and Matt thought she didn’t like the food. But the real reason she did not have much appetite was because she had already had lunch that day but did not have the heart to say so. They dated a few times until the end of the school year. Then came graduation and a party afterward for all the graduates. Debbie had also graduated as a single mom but had returned to Missouri. Matt was not expecting to see her at the party but a mutual friend came up to Matt and whispered Debbie was indeed at the party. Knowing that she was going to have to do the driving in this budding relationship, she drove five hours from Missouri for the party with the sole purpose of seeing Matt. After that they began dating a lot growing closer, and in fact dated for four years as Matt continued his education at the University of Iowa. At this point Debbie had the frank discussion with Matt about their relationship and gave him the choice of getting married or moving on. It was a loving version of “use the facility or get out of the bathroom.” Matt saw the light and on May 15, 1982 they were married in Muscatine, IA in the backyard of the church in a simple beautiful ceremony. Their families from Missouri and Iowa were in attendance. Matt’s musician brother Andy wrote and performed a song on the piano. Debbie, Matt and Mike moved to Coralville, a suburb of Iowa City in 1980. After trying to have a baby for several years and a couple of miscarriagaes, Debbie was pregnant with Miles. They had previously decided to buy their first house. Miles was born in April of 1988 and spent one night in the Coralville apartment before moving to their new house in Iowa City. The couple loved living in Iowa City, a college town with much diversity, arts and culture. They vacationed in Colorado many times where Matt’s father was born and raised. In 2000 Matt took a voluntary transfer with his work to Ft. Collins, CO where they have lived since. Debbie enjoyed card making, playing piano, cooking, organizing and taught us all a lot about life. She would save money to give randomly to people she would meet during the holidays, such as large tipping to servers. She was good at all the things that Matt was not, making for a very balanced life together. They spent years in the Mormon Church. She worked in Boy Scouts with the church troop Scout Committee Chairperson or many years and was known to be compassionate, supportive, and unwavering on advancement requirements. She recognized and was grateful for her time in church and credited it’s teachings as helping her get to her current spiritual awareness. Debbie discovered she had a gift for reading a person’s energy and started her practice, Life Balance Energy Therapy. This was her chance to help in physical, emotional and spiritual aspects of a person’s life. She never took credit for the success she had with her clients, only saying she was the facilitator and anyone could do it. She was a strong believer in Angels, and said many times they are here and wanting to help us. “Call on the angels” she would say about most any situation she was asked out. Her family took her up on this advice many times and found out for themselves how true this claim is. She said the angels only need an invitation to step in and help, and they want to. She studied relentlessly and taught us a lot about ourselves. She felt there were no random circumstances in life, but rather they were orchestrated by a higher power. She made us examine ourselves and see if this was indeed true, and made us believers. Debbie also spoke many times about what she thought happens when people pass from this world saying “they are just fine, it is the remaining loved ones that have all the sadness.” She would want us to celebrate today and be grateful for the blessings we receive, the good things we have, the friendships we enjoy, and the love and acceptance we have for our fellowman. And she was a beautiful woman. She is survived by her husband Matt, sons Mike Domigo and Miles Bailey, brothers Ray and David Cochran, sister Nancy Chambers, and many nieces and nephews across the country.

Deborah Kay Bailey was born on a snowy night on March 4, 1952 in St. Joseph, MO to Fay and Isabelle Cochran. She was the fifth of six children and grew up in Harrisburg, MO. She married Chris Crawford in 1971 and together they had a son Michael.... View Obituary & Service Information

The family of Debbie Bailey created this Life Tributes page to make it easy to share your memories.