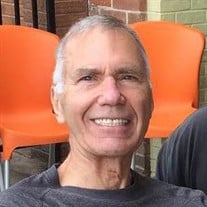 Denis W. Day, age 75 of Fort Collins, Colorado, formerly of Glen Ellyn, Illinois died October 6, 2018 at the Good Samaritan Society - Fort Collins Village. Denis was born in Queens, New York, and grew up in Hollywood, Florida. He graduated from Central Catholic High School in Fort Lauderdale. He then attended Florida State University and graduated with a Bachelor of Science. After graduating, Denis married his first wife, Suzann and they moved to the Chicagoland area for work. They had three children, Christopher, Patricia and Dianne. He worked providing Ad Sales for the Wall Street Journal and later founded his own business providing business incentives. That led to an affiliation with the travel industry and he soon founded the Day Partnership. In addition to providing business and recruitment services to independent travel companies, travel programming and cost containment counsel to Fortune 500 corporations, Denis was a sought-after industry speaker. Denis and Suzann later divorced and he married Jacqueline Gifford. Together, they bore two children, Kendall and Jordan. At this time of his life, Denis became more rooted in his faith in Jesus Christ. He was dedicated to his home life, his work, his travel and his ministry. Denis was proud to be an ordained Elder in the PCUSA church, a service he took very seriously. Denis authored two books: one called, How To Cut Business Travel Costs – helping businesses manage their travel programs and expenses; and his other book, Apple Pie For The Mind – A Recipe for Inspiration. He admitted to being called to write this book to help others experience Jesus in their own lives. In 2010, Denis moved to Fort Collins due to failing health and to be closer to his children. Later in his life, Denis began his battle with Parkinson’s Disease. He helped others facing this disease with prayer and encouragement. He looked at his fight with Parkinson’s as a blessing that brought him closer to Jesus as he helped and prayed with others. Many of his local friends were cultivated from his involvement with the Northern Colorado Parkinson’s Support Group. About a year ago, Denis moved into Good Samaritan, a place where his faith and ministry would continue to flourish until his final days. Denis is survived by his three daughters, Kendall Day, Patricia Day-Lamia (Francesco) and Dianne Heer (Chris); two sons, Jordan Day and Christopher Day; and grandchildren, Ryan, Becca, Danielle, Henley and Crosby. A memorial service to honor him and give thanks to God for his life will be held at 1:00 pm, November 1, 2018 in the Chapel at Good Samaritan Village, 508 West Trilby Road, Fort Collins Colorado. A reception will follow. His family requests that any memorial donations please be made to Good Samaritan Society - Fort Collins Village in Denis’ name.

The family of Denis W. Day created this Life Tributes page to make it easy to share your memories.