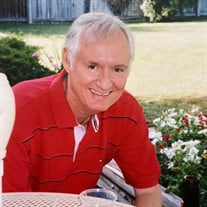 Dennis Cox passed peacefully on Sept 30, 2020 with his wife, Kay, and stepdaughters, Susan, Tracy, and Robyn by his side. Dennis was a loving, kind, and gentle man whose arms were always open to his five (step)grandchildren, Natalie, Hailey, Cadence, Torren and Kenley. He was born in Knoxville, Tennessee on Oct 28, 1946, the oldest of three children. Dennis attended Berea College in Kentucky and, after graduation, he enlisted in the United States Air Force. He spent time in California, Guam, where he was an aerial photographer and Lowry Air Force Base, CO as a photography instructor. In 1971 Dennis married his first wife, Sandra, and they celebrated the birth of their son, Brian, in 1973. They both preceded him in death. Dennis’ employment at the Bureau of Reclamation began in 1974 until he retired in 1995. When not working Dennis enjoyed biking, country dancing and genealogy research of his Cox ancestors. Dennis and Kay Anderson married in 2003 and recently celebrated their 17th anniversary. After living in Highlands Ranch, CO they moved to Windsor, CO in 2009 to enjoy retirement in a smaller, quieter community and to be closer to their grandchildren. In the past ten years, “grandpa” has been his favorite name. Time spent with the little ones whether it was at the park, swimming pool or snuggling on the couch were the highlights of his day. He would read books, color, play hide and seek, or tickle “Little Miss Kenley” whenever asked. Dennis fought a hard battle against advancing Alzheimer’s Disease over the past five years, with his last month's spent at Columbine West Health and Rehab Center. His family will forever be grateful for the comfort and care they provided him during this time. Dennis is survived by his wife, Kay, stepdaughters: Susan, (Todd), Tracy, (Jason), Robyn (Mike), and grandchildren: Natalie (16), Hailey (14), Cadence (13), Torren (10), and Kenley (6). In addition, his brother, David (Frances, Ray, Jimmy) of Illinois and his niece, Michelle and nephew, Johnny of Tennessee. His sister, Sharon, predeceased him. A private Celebration of Life to share special memories of Dennis will be held at a later time. A military service honoring Dennis’ time in the Air Force will also be held at Ft Logan National Cemetery.

Dennis Cox passed peacefully on Sept 30, 2020 with his wife, Kay, and stepdaughters, Susan, Tracy, and Robyn by his side. Dennis was a loving, kind, and gentle man whose arms were always open to his five (step)grandchildren, Natalie, Hailey,... View Obituary & Service Information

The family of Dennis Eugene Cox created this Life Tributes page to make it easy to share your memories.