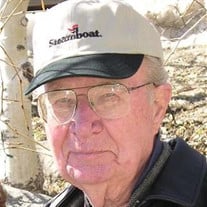 With family by his side, Dennis ‘Denny’ Noonan, 90, passed away peacefully on March 28, 2019 at his home in Fort Collins, CO. He will be remembered for his quick wit, his ability to tell a story like no other, and his love for his family, especially his wife of 66 years, Bettie Lou. Dennis was born in Yankton, SD on November 21, 1928 to Irma (Rafferty) & V.P. ‘Pat’ Noonan, the 2nd of their four children. The family moved to Casper, Wyoming in the early 1930’s and he attended Saint Anthony’s parochial school and graduated from Natrona County High School in 1946. Shortly thereafter, he joined the Army Air-Corp. and was stationed in San Antonio, Texas. He had some great tales of his times in the service that kept his listeners captivated such as when he’d boil an egg on top of the car in the Texas heat…and the time his Army Air-Corp. Sergeant had his squad play a game of basketball with the inmates of San Quentin prison in San Francisco. After he was Honorably Discharged from the Service, he met Bettie Lou Nall, who later became the love of his life and they married on June 27, 1950 at St. Anthony’s Catholic Church in Casper. He completed some college, studying Accounting at Casper College and had many interesting jobs over the years. He owned a gas station in Casper, worked for Hughes Tool Company in the oil fields throughout the West, owned a water truck company in rural Colorado and then worked for IBM near Boulder, CO as a Buyer retiring after 30 years. He and Bettie loved to spend their free time walking their piece of land near Lyons, CO and a family Homestead in the Black Hills of South Dakota. They raised four children - Mike, Mark, Kelly & Marybeth and several family pets over the years. Life was busy with their kids’ activities and they always made sure their kids got a chance to ski, swim and travel, often sacrificing of themselves. When his wife, Bettie, became ill later in life, he sat by her side for several years and looked after her at home, with the help of many wonderful Caregivers, and held her hand as she passed away on, August 21, 2016. Dennis will be greatly missed and never forgotten. He was preceded in death by his wife, Bettie Lou, 86, of Fort Collins, CO; his sister, Patricia Noonan, 92, of Casper, WY, and his parents Irma (Rafferty) Noonan & V.P. ‘Pat’ Noonan of Casper, WY; as well as several special nieces and nephews. He is survived by his sister Ellen Gerdom & brother Thomas J. Noonan (Eileen); His Children - Mike Noonan (Sheri), Mark Noonan, Kelly Leslie (Bill) and Marybeth Noonan; His Grandchildren – Monica Leslie, Nick Noonan (Rosy), Alex Leslie, Ashley Rose Noonan, Katrina Leslie; and His Great Grandchildren – Jade Noonan, Ireland Noonan and Liam Noonan along with many wonderful nieces, nephews, and cousins. His Funeral Service will be held Friday, April 5, 2019 at 9:30 am at St. Joseph’s Catholic Church in Fort Collins, CO with a reception to follow. There will be a brief Internment Service for his cremains held Saturday, April 6, 2019 at 10:00 am at Grandview Cemetery in Fort Collins, CO. The family requests that any donations be sent to ‘Catholic Charities of Denver’ in memory of Dennis Noonan.

With family by his side, Dennis &#8216;Denny&#8217; Noonan, 90, passed away peacefully on March 28, 2019 at his home in Fort Collins, CO. He will be remembered for his quick wit, his ability to tell a story like no other, and his love for his... View Obituary & Service Information

The family of Dennis Noonan created this Life Tributes page to make it easy to share your memories.