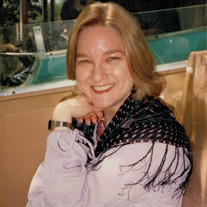 Diane Madeline Meade passed away peacefully on March 12, 2019 at the age of 74. She is survived by her daughters Debra and Theresa, grandchildren Sarah, Jennifer and Christopher and great-grandchildren Madeline and Alexander. She was born in New York City on July 13, 1944 to Madeline Margaret Cording and Joseph Meade. Throughout her life she did everything in her own unique fashion. A wife and mother at a young age, embracing the hippie era, including the rain and mud at Woodstock, trying new religions, and many different hobbies. She definitely had the travel bug and took the family everywhere across the United States twice, hiking and camping even into the depths of the Grand Canyon, although we were all sore after that. She loved everything new and exciting. In 1973 she moved with her family to Minneapolis, Minnesota for a few years, then returned to New York, later out to Fresno, California before finally settling in Fort Collins, Colorado. Over the years she traveled to many parts of the world, including belly dancing in Egypt, wine tasting in Greece, forging rivers in Costa Rica, climbing pyramids in Mexico, hitting the beaches of Uruguay, visiting the Great Wall of China, exploring Cambodia, and finally getting luscious massages in Thailand. Wherever she went she not only did a lot of sightseeing but explored the culture and embraced the people. Her spiritual quest found her studying many different faiths and trying several religions, embracing bits and pieces from all. She fought a hard battle with cancer over the last 5 years but we will always cherish the last bit of time we were able to spend with her. She will be greatly missed by those whose lives she touched. A special thank you to all those that aided her in that battle! Her ashes will be laid to rest in the Ossuary in Grandview Cemetery in Fort Collin's Colorado and her memorial service will be held at Goes Funeral Home at 3665 Canal Drive, Suite E in Fort Collins CO on Saturday March 16, 2019 at 1pm. May her spirit rest in peace. In Lieu of flowers please donate to a charity of your choice.

Diane Madeline Meade passed away peacefully on March 12, 2019 at the age of 74. She is survived by her daughters Debra and Theresa, grandchildren Sarah, Jennifer and Christopher and great-grandchildren Madeline and Alexander. She was born in... View Obituary & Service Information

The family of Diane Madeline Meade created this Life Tributes page to make it easy to share your memories.