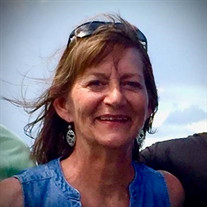 Diane Lynn Shepherd, after beating all odds in a tenacious fight against cancer, passed away at her home in LaPorte, CO on January 9th, 2020. She was surrounded by family and loved ones whom she had impacted during her life. It is their hope that these few words can capture some of the compassion, fighting spirit, humor, and joy that made Diane so special to so many. Diane was born in 1955 to Don and Jean MacKenzie of Erie, Pennsylvania and grew up laughing and loving with her sisters Allyn and Kathleen. They moved more than a few times during her childhood, before her family settled in Phoenix. Throughout her life the deserts of Arizona always held a special place in her heart. She married Jack McDonald, eventually moving to Colorado with a tent, 70 dollars, and two young children to start a life on 20 acres of undeveloped, forested property purchased from a local rancher. Gravity fed water, splitting firewood, and solar power were the standard as she raised her children and made a life outside the town of Bayfield. Over the years, hard work and planning saw improvements come to the land and house. When Jack preceded her in death, she stayed in the home they had made and continued to enjoy the life they had created. Whether she believed in it or not, fate, in the form of a necessary home inspection, would usher in another chapter of Diane’s life by introducing her to Patrick Shepherd. They married and Diane discovered the joy of road trips and seeing new places. Wine tasting in Colorado and Utah were a favorite. Rafting the San Juan River was another. Road trips to South Padre Island (preferably in a rented Monte Carlo) became a part of life and Diane fell in love with the beach and the sea. The beach joined the desert in her heart and her love of discovery continued after she and Pat moved to northern Colorado. Diane defied convention. She was able to make Birkenstocks and socks seem perfectly acceptable, all you needed was cool socks. She avoided interstates at all cost, you see more on the side roads. Her friends in the 80's and 90's were found in the cast of All My Children as she spoke of them like people she had over regularly. Her daily intake of the Today Show gave her a knowledge of just about everything going on in current events. She based her daily drive on the best convenience stores with the friendliest staff and perfectly blended Coca Cola fountain drinks with perfect ice, creating routes you would never see otherwise. Music was an integral part of Diane’s life. It was present wherever she went. Good speakers and a good beat were required. She loved live shows and some special highlights were James Taylor at Red Rocks, Vince Gill at the Bluebird in Nashville, Justin Timberlake, that's right, 'Bringing Sexy Back', and the last being The Eagles with Vince Gill in Phoenix. Family and friends were her greatest treasure. She poured her heart and soul into those around her and even when apart, they were never far from her mind. She shared her life and love with her husband Patrick, her son MacKenzie, daughter-in-law Karrie, grandchildren Aidan, Genevieve, and Layla, her daughter Kama, son-in-law Anthony, grandchildren Tula, Teak and Theo, Stepson Matthew, her sister Kathleen, nieces Leah, Laura, grandniece Akira, sister Allyn, Nephew Jeffery, niece Jennifer and grandnephews Becker and Macgregor. In lieu of flowers, please consider a donation to Charis Youth Ranch, A Sanctuary for Kids and Horses: https://www.charisyouthranch.org A Celebration of Life service is being held at Avogadro’s Number, 605 S Mason St, Fort Collins, CO on Tuesday, January 14, 2020 from 4:30PM to 6:30PM.

Diane Lynn Shepherd, after beating all odds in a tenacious fight against cancer, passed away at her home in LaPorte, CO on January 9th, 2020. She was surrounded by family and loved ones whom she had impacted during her life. It is their hope... View Obituary & Service Information

The family of Diane Lynn Shepherd created this Life Tributes page to make it easy to share your memories.

Diane Lynn Shepherd, after beating all odds in a tenacious fight...