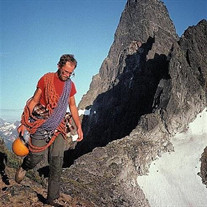 Livermore, CO – Donald Mank, 66, of Livermore passed away on October 1, 2019 at his home. Don was born November 19, 1952 in Buffalo, NY, to Carl H. Mank and Dorothy Otterman Mank, both whom predeceased him. He was buried with his parents at Acacia Memorial Gardens in North Tonawanda, NY, on November 15, 2019. His uncle, Robert Mank of Lancaster, NY and his cousins, Lynn Otterman (Danny) Eastman of Ithaca, NY and Marlene Mank (Donald) Snyder of Marietta, GA, survive him. He is also survived by several other cousins that live throughout the country. Don was an electrician by trade and a climber by obsession. He worked just enough each winter at his own business – Summit Electric, to support lengthy summer climbing trips (four to eight months) around the United States and Canada. This had been his life pattern for many years. His co-workers thought he was crazy, but he was following his dream. He entered the sport beginning with backpacking. For Don, climbing was its own reward, and he expected nothing more from it. His log book recorded almost 400 climbs. He would break many climbing rules including climbing with sneakers. For long trips he would stockpile tubs of peanut butter and cases of Ramen noodles. One of his missives was “minimum equipment, minimum information.” Many times, he would take on a climb without compass or maps, but utilize what he read from guidebooks and determined the best route on each climb. How do you find a climbing route? – no problem, just “follow the most obvious path,” though this did not always end up well. Don developed hardened, calloused hands from months of climbing as he never taped up. Unfortunately, later in life he had difficulty from arthritis which limited his ability to do what he loved the best. “The essence of climbing is to be continually testing your limits.” Climbing is of course a dirty job. Don had his own method of showering that included a parking lot (hopefully somewhat empty), hot water from a bathroom nearby, and soap. Many times “showering” with only shorts on in a parking lot. Since he was a minimalist when climbing that meant rarely did a camera get taken on a climb. There are a few pictures of him on his many climbs, but he was a part of nature and pictures just did not capture the feelings that went with watching the northern lights from the top of a mountain. Enjoy this wonderful article written by his friend and fellow climber, George Bell. http://www.gibell.net/trip_reports/50cc.html Donations in Don's memory can be sent to Nature Conservancy.

Livermore, CO &#8211; Donald Mank, 66, of Livermore passed away on October 1, 2019 at his home. Don was born November 19, 1952 in Buffalo, NY, to Carl H. Mank and Dorothy Otterman Mank, both whom predeceased him. He was buried with his parents... View Obituary & Service Information

The family of Donald C. Mank created this Life Tributes page to make it easy to share your memories.