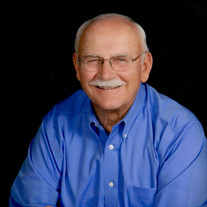 Donald Dean Rogers, age 85, beloved Husband, Father, Grandfather, Uncle and Friend passed peacefully from this world, June 28th, 2021, in Fort Collins, Colorado. He is preceded in death by his wife Karen and leaves behind children; Scott, Stacy and Mark and grandchildren; Emma, Jack, Kailea and Maila. His faith in God guided his character and actions in life. Some of the traits that reflect his true character are humility, kindness, work ethic, compassion and service to others. Don was a leader for his family, community, and church, with a quiet dignity that was as inspiring as it was distinguished. Don was born Easter Sunday, April 12th 1936 to Joseph James Rogers and Verna May (Hagermann) Rogers of Muscatine, Iowa. His sister JoAnn Rogers died at birth. Growing up in the adjacent family home behind his Grandparent’s house, Don was fortunate to have a large extended family nearby who played an important role in his youth and community. He told stories of the Hawkeye Pearl Button Company, which his grandfather built from the ground up and the delicious German pies his grandmother lovingly prepared for him. A graduate of Muscatine High School, Don loved all sports including football, basketball, and track & field. He was also active in the Boy Scouts of America, earning the prestigious rank of Eagle Scout. Don continued his academic and athletic pursuits at Iowa State University in Ames, Iowa. He played football and was a member of Sigma Phi Epsilon fraternity, graduating with a Bachelor’s of Science in Forestry. Don began working for the US Forest Service and met his wife of 57 years, Karen Ann Kimball, in Denver, Colorado. His focus on timber management took him to Walden, Colorado then Del Norte, Colorado and on to the Black Hills of Custer, South Dakota. The Mountains of Colorado always called him back, so in 1979 he put in a transfer to Leadville, Colorado and eventually settled and retired in Fort Collins, Colorado. During the Summer Don helped fight wildfires across the US as part of the US Forest Service. In addition to the role of firefighter, the last few years Don served as “Camp Boss” on several fires making sure the crews had all they needed to sustain the energy to fight the wildfires successfully. His three children grew up with a father with a passion for all things outdoors and shared his love of the land, forest, rivers and maps. One of Don’s (greatest accomplishments) and favorite hobbies was skiing. He served on the National Ski Patrol at both Steamboat Springs Ski Area and Wolf Creek Ski Area, later volunteering as a Ski Ranger in Summit County. His love of skiing was passed on to his children and Don attended many ski trips with the Senior Center of Fort Collins well past his retirement from the Forest Service. Don’s grandchildren have been fortunate to have his support in attending their many activities throughout the years. He was always eager to cheer them on and share his knowledge of the outdoors with them. They loved him very much! At request, his body has been cremated and in the months to come, there will be a gathering in Fort Collins, Colorado. Details will be forthcoming. In the meantime, and in his honor, in lieu of flowers, please be kind to one another, be good to one another, and support causes which do the same.

The family of Donald Rogers created this Life Tributes page to make it easy to share your memories.