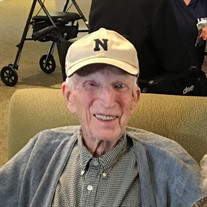 Donald Albert Tench, 92, a long-time resident of Kingsport, Tennessee, passed away on July 15, 2019 in Ft. Collins, Colorado. Don was born in Leechburg, Pennsylvania on April 22, 1927 to William and Ethel Tench. Following graduation from Leechburg High School in 1945, he enlisted in the U.S.Army and was honorably discharged following the end of World War II. Don earned a degree in Mechanical Engineering from Grove City College in 1952 and was employed as an Engineer and Manager with American Window Glass in Pittsburgh, Pennsylvania. In 1961 he received a patent for a Glass Drawing Apparatus. He relocated with American Saint Gobain to Kingsport, Tennessee in 1970. Don retired from the Kingsport Press in 1992. Donald married Cheryl Elaine Ward on November 29th, 1952 and they remained loving husband and wife until his death. Cheryl passed away 3 days after Don, on July 18, 2019. Donald was an active member of Presbyterian churches wherever he lived – First Presbyterian Church, Leechburg, PA; Slippery Rock Presbyterian Church, Ellwood City, PA; First Presbyterian Church, Greensburg, PA; and finally as a member of the Colonial Heights Presbyterian Church where he served as an Elder. He participated as a volunteer in the church’s Habitat for Humanity home building projects. Don lived his life with a strong sense of honor and duty, instilled by his family, his membership in the Boy Scouts and in the Presbyterian Church. He was a quiet and peaceful man and was possessed of a sunny disposition until the end. At his 80th birthday party he said “I’ve been loved every day of my life.” Don loved golfing and was happy to have time to play during his retirement. He enjoyed playing locally at Warriors Path State Park, but also enjoyed exploring courses in California, Colorado and Florida. Upon moving to Kingsport, Don purchased a Sunfish sailboat to sail the TVA lakes and to “try and make up to his children for making them move”. He imparted a lifelong fondness for sailing in all of his children. He also enjoyed and taught his children to swim, camp and fish. Don was also an accomplished gardener. Along with his wife Cheryl, Don purchased a piano for the family and made sure that all types of music lessons were provided for their children throughout their childhood and adolescence. Education was an important value, and college educations were provided for all of their children. Donald loved Christmas and spoke of as a little boy never sleeping Christmas Eve night until Christmas morning – too busy listening for Santa to arrive. He continued the tradition of his parents of beautiful and sometimes novel Christmas decorations both inside and out. Every year’s Christmas tree was heralded as being “the most beautiful tree we’ve ever had!” During his retirement Don wrote a memoir of his childhood years entitled “Growing Up on Gosser Hill”. It is a well written time capsule and treasured gift to his family, and is ensconced at the Leechburg, PA Historical Society. Don will be sorely missed, particularly for his sonorous narrative voice which was put to good use game calling in the “beloved” family “board” game Bonanza. Nobody can call it like him. Donald was preceded in death by his parents and his brother, Robert. He is survived by his children, William (Beth) of Kennett Square, Pennsylvania , Daniel (Sandy) of Athens, Georgia, Susan Jacobi (John) of Ft. Collins, Colorado; Granddaughters Lauren Tench Mancuso, Ava Jacobi, Cora Beth Tench, and Annie Tench; Grandson William Jacobi; and Great grandson Carter Mancuso. He is also survived by nephews Robert Tench of Allentown, Pennsylvania and Jon (Heidi) Tench of Danbury, Connecticut. Donald spent a few years at Brookdale Rock Springs Assisted Living and the family would like to thank Suzy, Sharon, Jessica and Vicki for their help and assistance during that time. The family would also like to thank caregiver Faith Collins of Comfort Keepers for the loving care she showered upon both Don and Cheryl. Donald spent the last 15 months of his life at Morningstar Memory Care in Fort Collins, CO and the family would like to thank Catherine Mancha for leading by example and hiring the best staff ever. We would also like to thank Pam for her reassuring presence and Sara and all the staff for their loving care. A service and interment at Colonial Heights Presbyterian Church Columbarium in Kingsport, Tennessee will be held a later date.

The family of Donald Albert Tench created this Life Tributes page to make it easy to share your memories.